A Discovering Diamonds Review of The Saxon Spears: The Song Of Ash by James Calbraith 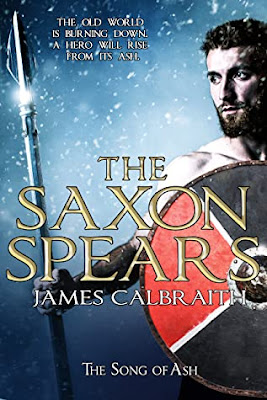 Book #1 of a series
Six-year-old Ash is a slave in the household of Pascent, a rich nobleman and councillor to Dux Wortigern in London.  But Pascent treats Ash like a son and he and Pascent's real son Fastidius become firm friends. Whilst Fastidius is destined for the Christian Church, Ash shows a greater interest in the arts of war, especially strategy which he learns under Fulco, Pascent's Frankish bodyguard. Ash's other tutor is Father Paulinus who teaches him  many things including the Christian ways. Ash is clearly of Saxon origin although he can recall little before being sold to Lady Adelheid, Pascent's wife.

We follow Ash as he grows to puberty, falling in love with Eadgith, the daughter of the bladesmith. This first romance is doomed to failure, however.

Whilst visiting Fastidius who is now studying in London, Ash encounters Horsa, a chief of the Uites in London. A lot of action follows this meeting – warring tribes, untrustworthy leaders, treachery  and a deadly band of outlaws. And all the while, Ash is wondering just whose side he is really on.

There is a touch of Bernard Cornwell's Uhtred in that Ash finds himself brought up in one culture whilst knowing that he belongs to another. I found the opening chapters rather slow, although the pace certainly picks up after that. There were one or two phrases that sounded a little too modern for me, but other than that, and my initial observation above, this was a book that I enjoyed.
(The novel is written in the present tense)