A Discovering Diamonds Review of Artists And Spies by Pamela Stephen 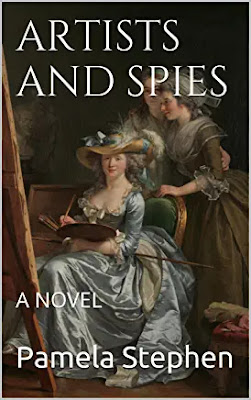 
Charlotte Le Juge du Condray is a nun with an artistic talent inherited from her father. When he dies, she flees the nunnery to claim her inheritance and with the help of the son of her father's old retainers and a maid, she transfers to Chiswick in London, changes her name to Charlotte Judge and attempts to start a new life as a painter.

Her butler, Antoine Dupont, not only proves more than capable at his duties, but also has a secret other life – he is an agent for England and involved in trying to expose a plot to assassinate King George II.

This is a nice, easy read with no deep intricacies of plot. Slowly but surely Charlotte integrates into English society and enhances her reputation as a painter. Antoine goes about his secret duties with ruthless efficiency. It is evenly paced for the most part, although I did feel that it dropped once Antoine had completed his mission. Charlotte is totally unaware of Antoine's activities, which does stretch the imagination a little, but then, this is fiction.

The paperback copy I received did have one or two typos and I also felt that when a quote was used at the start of a chapter, the spacing could have been a little more evenly set. I liked the cover, although it was a little 'dull' in terms of colour and finish, however, I did see a different version elsewhere that is brighter and slightly altered. Again, on my copy, the back cover blurb was virtually unreadable – black print on a dark green background, so maybe the alternative edition has now improved this?

So this was not a perfectly produced book, but the story was solid, enjoyable and engaging.