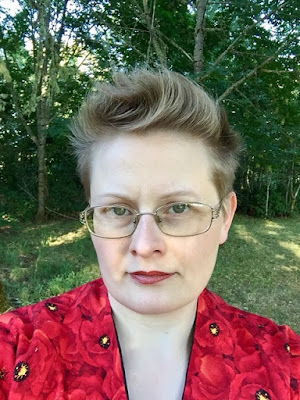 Eva was born in Jacksonville, Florida. She left that humidity pit at the age of three and spent the next twenty-one years in California, Idaho, Kentucky, and Washington before ending up in Oregon, where she now lives on a homestead in the western foothills with her husband and five children, two of whom are human.

Eva cannot remember a time when she couldn’t read, and has spent her life devouring books. In her early childhood years, she read and re-read The Boxcar Children, The Trumpet of the Swan, anything by Johanna Spyri or A A Milne, and any issues of National Geographic with illustrated articles about mummified, skeletonised, and otherwise no-longer-viable people.

As a teenager she was a huge fan of Louisa May Alcott and Jane Eyre.

As an adult she enjoys primarily historical fiction (adult or YA) and nonfiction on a wide range of topics, including, but not limited to, history, disaster, survival, dead people, and the reasons people become dead. Audiobooks are her jam, and the era of World War One is her historical pet.

Eva began writing stories when very young and wrote almost constantly until she was 25, after which she took a years-long break before coming back to pursue her old dream of becoming a published author for real. She loves crafting historical fiction that brings humanity to real times and events that otherwise might seem impersonal and distant, and making doodles to go with them.

When Eva is not writing, she is teaching her human children, eating chocolate, cooking or baking, wasting time on Twitter, and making weird shrieky noises every time she sees her non-human children. 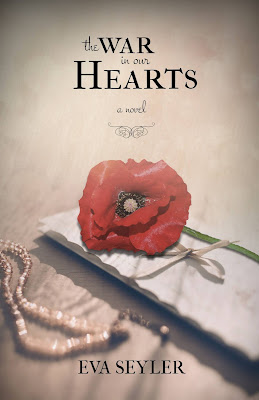 About The War in Our Hearts:

France, 1916: Estelle Graham faces a nightmare. Expecting to meet her beloved husband and bring their newly adopted daughter home to Scotland, she instead finds him gravely injured and unconscious in a casualty station. As she fights for his care, she takes solace in his journals and letters.

In a farmhouse in Somme, Captain Jamie Graham is forever changed when he meets young Aveline Perrault. Both of them broken and walled off from the cruel and cold world around them—made even crueler and colder by the Great War—the pair form an unlikely bond. She finds in him the father she never had, and with her love, he faces the pain from his own childhood.

Discover the depth of love and faith in the face of brutality and neglect as they learn to live while surviving World War I.