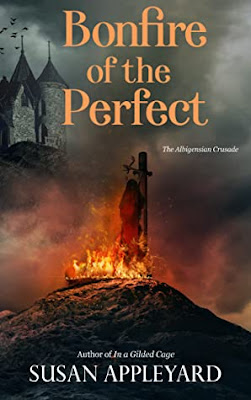 
"Prompted by the murder of his legate, in 1209 Pope Innocent III launches a crusade – not against the infidels of the East, but against fellow Christians living peaceably in the south of France. They are the Cathars, regarded as heretics by the Roman Church, and the sect is flourishing. Thousands of knights, landless younger sons, mercenaries and assorted riff-raff pour south with Christian zeal to exterminate men, women and children of the same country. A dilemma soon arose: How to tell a Cathar from an orthodox Catholic? Lovers Bräida and Jourdan are torn apart when Carcassonne falls to the crusaders. Jourdan joins the resistance while Bräida flees with her family to the relative safety of the Pyrenees, neither knowing if they will see one another again. But Bräida is not safe in her mountain retreat, because the Church has found an answer to its dilemma – the creation of the Inquisition. No one can escape its diabolical clutches. This is a story of faith, endurance and the love of liberty in a time of unimaginable cruelty."

An ambitions and epic tale set during the Albigensian Crusade of the 13th Century, Bonfire of the Perfect relates the horrifying persecution of the Cathars, as seen through the eyes of the narrator, Bräida.  The novel opens with Catholics and Cathars living peacefully together; Bräida’s best friend, Beatrice, is a Cathar. But in 1208, Pierre de Castelnau, Pope Innocent III’s legate, is murdered, and the lives of Bräida and Beatrice and thousands of others change forever. Castlenau’s murderer was believed to be in the pay of Raymond of Toulouse, not himself a Cathar, but neither an enemy of them. For the Pope, already angered by the increasing rejection of the Catholic Church in southern France, this was the perfect excuse to raise the stakes in his campaign to eradicate the Cathar heresy.

There is a great deal of history to encompass in a single volume of less than three-hundred pages, as the crusade changes from targeted persecution of Cathar believers to a wider-spread campaign against the landholders of Languedoc. The author frequently shows us events – and their impact – on Bräida and her family, choosing key events in the long crusade and its aftermath for these scenes. But, inevitably with this much complicated history, much of it occurring away from where Bräida is living, there are also parts of the story where the events are told to us in summary. Bonfire of the Perfect opens with the mature Bräida writing a book about the events of her life. Scenes in this timeline occur several times throughout the story, and the sections where events are recapped are generally framed as Bräida’s recollections.

An enormous amount of research has gone into Bonfire of the Perfect, and I learned a lot about both the Cathar heresy and the appalling history of the crusade to eliminate it. The author does not shy away from showing us the horrors innocent people were subjected to in the name of the Catholic Church. Recommended for anyone who wants to know more about the Albigensian Crusade and its effect on the people and culture of southern France.