A Discovering Diamonds Review of The Blood Hound by Jan Needle 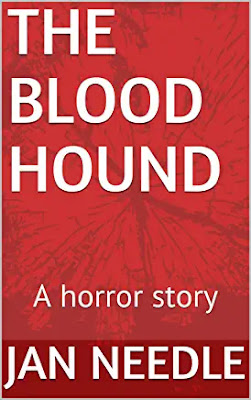 "A happy little girl called Emily is skipping home to have her tea. She has won a prize at school, and tonight the annual fair starts. Life is perfect. Across the road, her neighbour calls out for her to buy him some tobacco from a local shop. Emily – just seven years old – is delighted at the grown-up errand. But half an hour later she is dead. The crime is savage beyond belief. The tiny little girl has been raped most viciously, then beheaded. Her limbs have been hacked off. The year is 1876, the town is Blackburn, a place of cotton mills, steam and poverty. It is bursting at the seams for the jollities, with roustabouts, costermongers, pickpockets – and many, many Irish labourers who ‘can't hardly even speak our language’. Within hours there are vigilante bands wandering the streets, and 'suspects' are being herded into jails. And then two little girls, friends of Emily, point out the real culprit to the police. They have seen him give her money. He's a tramp they know as Smelly Bob. The townspeople have their scapegoat. There can be no doubt at all. Except that the local detective, John Holden, refuses to believe it. Against all the odds, and using the first bloodhound to ever hunt a murderer in England, Holden moves in to prevent a lynching. But someone - anyone - has to hang."

This brutal little book of murder is the narration of real events, as far as anyone can know them all, which took place in Blackburn,  England, in 1876, on the eve of Fair Week. The author has fleshed out the characters, given what is known of them, and to that extent this is fiction; but the basic facts are a matter of record. The unique Blackburn accent is used to give a true flavour of the time and place, but it also lends an air of almost childlike innocence, confined as it is to the less educated members of society.

Emily Holland, aged seven, goes to school dressed in her Sunday best. She is to receive a prize, and her parents are proud of her. She comes home wearing a purple and white sash over her smart clothes, which she rightly wants to show off. Some of the other children are jealous; pride in achievement is for adults.

Someone she knows by sight asks her to run an errand, to fetch him some tobacco while he minds his shop, and when she obliges, he offers her a treat. Her parents know him, so she trusts him.

The who, what, where and when of the following crime are no mystery; they're described to us in all their horror along with the bloody aftermath and the calm way the murderer goes about hiding the evidence. He has the right tools for the job, and is certain he will never be caught. After all, the town is crawling with all types of strangers and travellers; why would anyone look at him? This is not a 'who-dun-it' msytery novel, the readers knows the culprit, but the interest is in the aftermath of murder.

The Superintendent of Police is condescending, certain there has been no crime, just a child wandering where she shouldn't after school. The parents are fussing over nothing, and he sees no need for a search. A poster is made offering a token reward of £1, because Emily will turn up of her own accord.

The hours pass, and there is no sighting of her. Vigilante groups take time off work to look for the supposed culprit as described by two of her friends. Newspapers and balladeers take up the story and pressure mounts upon the police to solve the crime – or at least to be seen to do so.

The author states at the beginning that this was the first case of a bloodhound being employed by police. In fact two dogs prove to be the murderer's undoing, along with the persistence of Detectives Holden and Livesey, local men who follow their instincts and the clues as they arise. Newspapers play their part too, though not perhaps as their editors would wish.

The rape, murder, and disposal of a small child are described in detail, but unemotionally, as seen through the eyes of the perpetrator. The execution is similarly bereft of feeling. This is not a book for the squeamish; it's an examination of the human actions and reactions behind an appalling murder, historical fact and newspaper sensationalism, with the veil of assumed decency removed.

Not an 'entertaining' read, but of possible interest to those who read, write or research historical crime.