Prisoner of Penang by Clare Flynn 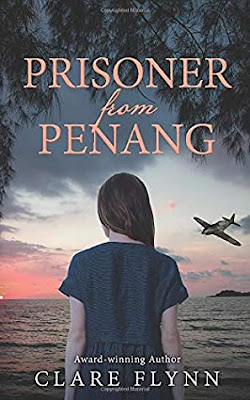 Mary Helston is a young woman when World War II overspills into Singapore and the women and children are forced to evacuate. As we hear of the recent death of her fiance – a pilot shot down by the Japanese – we also learn that Mary's first fiance had committed suicide following an affair with Veronica Langton, one of the circle of sophisticated ladies that comprise Society in Singapore.

Mary and her mother are part of a crowded ship that is to take them to safety, but it is attacked by the Japanese navy and the captain surrenders. From there, the women are taken to a makeshift camp and their nightmares begin.

The book is divided into two parts. The first of these comprises Mary's memoirs written after the war and is in the past tense. It tells of the conditions, sufferings, diseases, maltreatment, torture and, sadly, death amongst the prisoners. It is not written in graphic detail, but it doesn't need to be for the author puts over all these inhumanities with such a skilful pen that we don't have to imagine how horrific it must have been for the real women who endured those terrible times.

I would have liked to see a little more dialogue as Ms Flynn handles those very well, especially a particularly poignant scene between Mary and Veronica – bitter enemies but each earning the respect of the other. However, I can see that as a purported memoir 'Tell' rather than 'Show' is probably more appropriate.

Part Two is written in the present tense as Mary, back in Singapore after the war's end, struggles with her life, her memories and a future that she views as pointless. But a chance meeting changes all that which, without wishing to get into the realm of spoilers, the reader will find very emotional.

If you remember and watched the TV series Tenko, then you will thoroughly enjoy this novel as I did