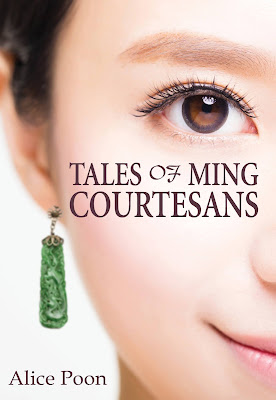 Tales of Ming Courtesans is the interwoven story of three young women who trained and worked as courtesans in 1600s China. Rushi, Yuanyuan, and Xiangjun were all real women, and they had a shared background of being sold as children to “thin horse traders,” who were essentially sex traffikers. Their paths cross in a performance house in Nanjing and their friendship sustains them through some truly awful events, ranging from small personal tragedies to sweeping national crises.

The thing I liked best about this book was how incredibly descriptive it was. Images, smells, and locations were all vividly described; I felt like I could see the river, smell the flowers or the cooking, hear the birds and noise of the town. I liked the names of a lot of the houses or other places - Villa of Alluring Fragrance, for example. It’s descriptive and mysterious and lyrical. I loved it. It made me want to take a trip to China to see some of these places.

The women themselves were a force to be reckoned with - or should have been except that life, men, and the caste system kept them down. I know nothing about Chinese history, and even less about this particular period transitioning between the Ming and Qing dynasties. I enjoyed learning some of the history and culture of that time. It was such a rich culture with many interesting rituals, art, and literature.

I have a very likely inaccurate vision of these courtesans as something akin to Inara Serra from Firefly. My understanding is that courtesans were pretty well-educated, trained in poetry, dance, music, performance, and yes, bedroom skills. But they could choose whether or not to take a patron to bed for money, and that choice was the real defining difference between courtesans and prostitutes, who had no choice at all. At any given moment, all three women in this novel worried they would have to sell themselves to a brothel to pay off a debt or avoid homelessness.

Owing a debt literally meant you could be sold like a chattel to anyone who could pay off the debt by buying you. It is a horrifying thought that the women effectively were forced to participate in their own slavery and sale of their bodies. The courtesans seemed to be in high demand as well, which gives a really interesting dichotomy because it isn’t the sort of role I typically associate with being desirable. The ways in which families sought to have a child by using concubines was new to me. I guess I just need to read more since I am woefully ignorant about this part of the world, in any time period.

My only quibble was that, occasionally, the dialogue between characters felt a bit odd. Sometimes it seemed really formal, especially for just talking to friends or family. Other times it had some anachronisms, like saying a courtesan can “hook up” with anyone she chooses to. That drew me out of the story a little bit, but the rest was good enough to gloss over these slips.