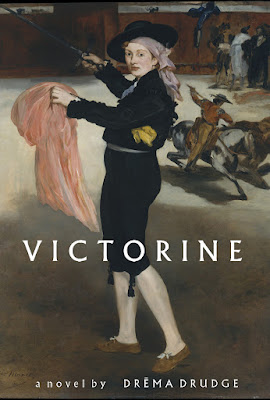 We’ve all seen her on the covers of lush and shiny Impressionists coffee table books. Naked—sitting on the grass with two clothed men in Le déjeuner sur l’herbe and reclined on a chaise in Olympia—or clothed as a matador, or a street musician, or a demur mother with her daughter by the Gare Saint-Lazare. But precious few of us know anything of Victorine Meurent, Manet’s favorite model. Drēma Drudge sets out to change all that and succeeds in grand fashion.

This might seem a variation of a coming-of-age story, had not a young Victorine sprung, Athena-like, fully formed from the fertile and thoroughly well-informed mind of Ms. Drudge. We meet Victorine early in the book as a sexually-open teenager, casually dumping her first lover for a magnetically violent bare-knuckle boxer. She had posed nude for her printmaker father, a frustrated painter himself, so manifests little concern for the nude poses demanded by Manet after he encounters her in her father’s shop. She is, quite simply, a thoroughly modern woman, of a kind just emerging from the social and artistic ferment of Third Republic Paris. Victorine is exceptionally self-aware, particularly of her ambiguous place as both artistic collaborator and a tool to exploit and shock the male gaze. Her fluid sexuality is of a piece with this broader self-awareness—sometimes emotionally fulfilling, always physically pleasurable, and occasionally transactional.

But Victorine Meurent was not just the striking, fair-skinned redhead who anonymously entered our cultural canon through her remarkable collaborations with Édouard Manet. She became a respected painter in her own right, displaying six of her works during the great salons of the late 19th century and right up to the First World War. Throughout Victorine, she is singularly goal-driven. Tired of posing for and stroking the egos of men who could or would be great artists, she seeks a way to attend art school herself with a most intense focus.

She encounters some role models—other women artists—whom she alternately loves or loathes. Against great financial odds and despite endless patriarchal and misogynistic barriers, she is finally accepted into the Parisian community of artists as a more or less coequal member.

This book is a work of literary fiction about a real person set in an historic era, rather than historical genre fiction. The story is narrated by Victorine herself in first-person present—which is a bit jarring to start. And as most authors know, first-person narration is a delicate high-wire act that requires significant craft to pull off successfully. What first-person gives in intimacy and vividness, it often takes away in limitation on point-of-view and limitation of setting. Ms. Drudge negotiates this challenge beginning-to-end with a combination of adroit plot structuring and a writing style that flashes and gleams like an Impressionist’s palette. The author’s shining prose pulled me inexorably through the few weaknesses in this work, such as a slightly flabby middle and a somewhat rigid insistence on threading the story through a few too many notable paintings. But with Victorine’s provocative and evocative voice shining through Ms. Drudge’s crystalline prose, these faults recede into pettiness.

I highly recommend Victorine for both those looking for literary fiction in historical settings as well as fans of stories from Paris in the Belle Époque.