Death in Delft by Graham Brack 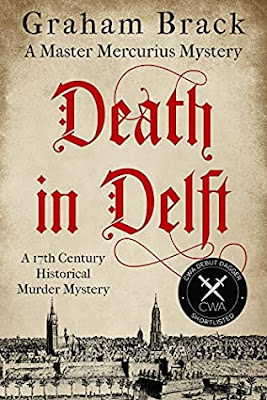 The first book in a new series by crime writer Graham Brack, Death in Delft features a gifted but at times mystified cleric and academic named Master Mercurius of the University of Leiden. Mercurius is sent to Delft in the province of Holland at the request of the mayor, who needs help locating three young girls who have been abducted. One has already been found in a shallow grave outside the city; the other two are still missing. The good citizens of Delft are desperate to find the perpetrator before more innocent lives are lost or destroyed forever.

So begins what could be a typical investigatory historical crime story, but there is an aspect of this novel that marks it out as anything but typical. To start with, Master Mercurius, a reluctant detective, relates the events in the first person through his private journal, where he also doubts his skills and acknowledges that some of his apparent cleverness or intelligence is down to plain old good luck, or very possibly divine intervention. A good portion of Mercurius’ limited free time is given to his personal relationship with God: he is both a Protestant pastor and an ordained Catholic priest, the latter being something he needs to keep strictly to himself because he is living in a part of Europe where the narrow-minded interpretation of being God-fearing and ‘good’ equates with being a sombre and entirely sober black robed Protestant.

I thoroughly enjoyed reading Master Mercurius’ thoughts on religion, spirituality and his life and times, although I can see that some readers may think this slows the pace of the novel. But it is these wry, personal observations conveyed with dry humour that make the book what it is – something different.

Aside from philosophical musings, however, this is a page-turning whodunnit by a skilful author who knows his historical epoch inside out. Weaving real people such as the artist Vermeer (and his infamous mother-in-law) into the action, and drawing on the prejudices and expectations of ordinary (fictional) folk such as a tavern serving wench and members of the Civic Guard, Brack brings the reader right into 17th century Holland. I know this region fairly well having lived near The Hague for a few years myself (in modern times, of course), but his descriptions of the bleak landscape, the special blackness of canals at night, and the bone-chilling winter dampness took me right back.

Death in Delft is an intriguing, atmospheric and compelling novel. If you enjoy crime fiction set in the past, it is a must. I am certainly looking forward to Master Mercurius’ next outing. Highly recommended.