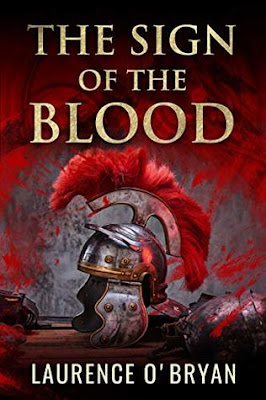 A few years ago, I stood in the crypt of York Minster and looked down through a glass panel to the Roman ruins that lie beneath it. Below my feet lay a site that just may have been where Constantine’s troops proclaimed him Emperor in 306 AD: a possibility that made me shiver with delight and awe.

Constantine was the first Christian emperor of Rome, although his conversion is considered to happen after the scope of Laurence O’Bryan’s The Sign of the Blood, which concerns itself with the years leading up to Constantine’s proclamation as Augustus.

Factually, the book presents Constantine’s life in a manner consistent with the generally agreed facts. His father, Constantius Chlorus, became first the junior and then the senior Emperor of the West, the last promotion occurring in 305 AD. Constantine was his son by a low-status woman, Helen or Helena, of Greek origin, whom he later divorced to marry Theodora. Prior to his father’s promotion to Augustus, senior Emperor of the West, Constantine was educated by and served under the Emperor Diocletian, including in the first years of Diocletian’s targeted persecution of Christians within the Roman Empire. When Constantius Chlorus became Emperor of the West in 305, Constantine joined him in his campaign in Britannia, where his father died the following year.

This basic story frames the tale told in The Sign of the Blood. Much of the story unfolds through the eyes of a slave girl, Juliana, whose father is, reputedly, a chieftain of the Britons, who, bought by and belonging to Constantine’s friend and companion Lucius, accompanies them to Britannia. Their second travelling companion is the priestess Sybellina. For Juliana, travelling to Britannia is a chance to find her family. Sybellina’s motives are less pure.

Detailed description and attention to history are the book’s strengths, as well as a rich imagining of Constantine’s doubts, both about gaining his father’s approval and his stepmother Theodora’s desire to see her son succeed Constantius instead.

Uneven pacing is its greatest weakness, while some sex scenes could have been much better written. But O’Bryan gives us a credible look at Constantine’s early years; hints at events that may have influenced his later conversion to Christianity, and shows us the intrigues of Roman politics in the 4th Century following Diocletian’s reforms. The love story that unfolds adds humanity to the young Constantine, reminding us that even great Emperors were also simply men.