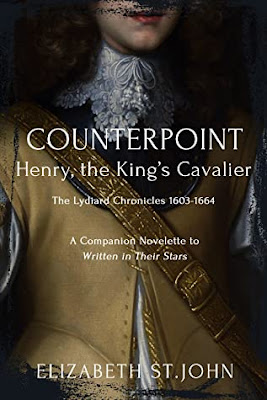 
"A man may think his life is only measured by battles fought for the king. Until he meets a woman worth fighting for. Henry Wilmot. Cavalier. Seasoned soldier. Grieving widower. On the eve of battle he is sent by the king to requisition arms. What he did not expect was that the supplies were a gift from a feisty and attractive widow who was hiding her own Royalist beliefs in plain sight. Even more alarming was that his quest took him into the heart of an enemy Parliamentarian household. Will Henry survive the fight of his life? And will Nan remember him if he does?
A counterpoint is a melody played in conjunction with another, or an opposing viewpoint in an argument. Our lives are complex, and each one of us carries within us a counterpoint to another’s story. Here is a counterpoint to Nan Wilmot, from Written in Their Stars."

Elizabeth St John has written an accomplished and very successful trilogy, based on the true lives of her ancestors during the turbulent times of seventeenth-century England. In addition, she has produced three 'counterpoints' told by characters whose point of view is not presented in the novels. It's a brilliant idea and works really well. I've read all three novels and this is the second of the counterpoints I've had the pleasure to read, but I approached it as if coming to these stories for the first time and so I can confidently say that the cleverness is in the way that you can absolutely read these counterpoints before or after you read the novels and, in fact, (and here's the acid test) you could read them as standalones.

This is described as a short story but I'd say it's slightly longer and may be edging towards a novelette. I'm not sure of the word count but I certainly didn't feel 'short-changed'. In addition, the first chapter of Written in their Stars is included at the end, a nice added bonus.

This definitely doesn't feel like a missing chapter from the novel, rather it reads as a story in its own right. We meet Henry just at the point where he meets Lady Lee (whom readers of the other stories will know as Nan) and on the eve of the confrontation at Edge Hill, which was the first pitched battle of the civil wars. This is the point where the strife and skirmishes become outright war, and both Henry and Nan are all too aware of this and what it will mean. The danger of their situation adds a piquancy to their meetings and it was the perfect backdrop for this companion story, giving high drama to the piece. Henry is presented as a rounded character, thoughtful, clearly attracted to Nan but also, crucially, a man of his time. And that means having to be a soldier. He may not like what he has to do, but he does it anyway. Nan is unusual for her time, something Henry reflects on, but she is not (nor is she in the novels) a stock, 'feisty' woman, but one who thinks carefully and acts intelligently.

Read this after Written in their Stars, or before. But either way, you will enjoy Ms St John's style of writing and her skilful world-building.