A Discovering Diamonds Review of Thieves' Castle by Dean Hamilton 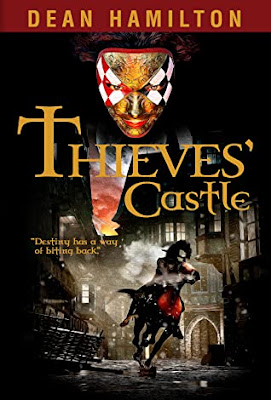 Meet Christopher 'Kit' Tyburn. He is rough, tough and utterly ruthless but not unintelligent. He works for Francis Walsingham – on and off. When he is not employed in secret missions abroad, he ekes out a living as a player, an actor with an established troupe.

A missing gold-seller should be no problem for him to find as Tyburn knows the best and worst of Elizabethan London – both in terms of location and people. He soon discovers that there are more than just himself who want to locate the man, who holds the accounts of many people – and in the wrong hands, the accounts could prove ruinous and not just financially. As the race to find him intensifies, Tyburn uncovers secrets that are dangerous to him as well as an evil adversary, The Harlequin, who has emerged as running the London underworld with ruthless violence.

A truly action-packed adventure is what we have here. Fights are meticulously described as are the lowest areas of London. A handful of famous figures mingle well with the fictional and the overall atmosphere is authentic.

There is strong language throughout but of more interest is the amount of  'street terms' that come thick and fast. Now, there is a Glossary for those who are unfamiliar with these terms (and it is welcomed) but in this e-book edition, it appears at the end. In a printed book, this is fine but I wonder if it might be slightly easier to access if it were at the front? This, however, is not meant to be detrimental to this book but is a general observation.

One thing that I don't like is footnotes: fortunately there weren't too many (less than a dozen) and most of those could have been incorporated in the narrative or speech.

Although the second in a proposed series (Book 3 is already underway) this is written as a stand alone. I thoroughly enjoyed this encounter with Christopher Tyburn and will look forward to his further escapades.