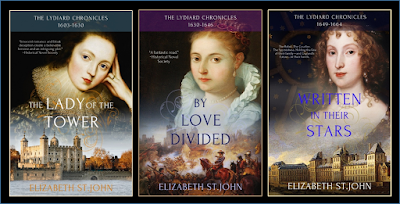 Writing about my ancestors has been a remarkable journey. Holding their documents, sitting with their portraits, and reading their words of hope, dreams and sorrows is an emotional process. And, knowing what lies ahead as they share their thoughts can be harrowing. But, as a writer, realizing that these people lived and loved much the same way as we do today can also give me great joy as I tell their stories. It is an honor to bring them alive for today’s readers and remind us that we all have the same dreams and desires, even with centuries between us.

The Lydiard Chronicles, my historical fiction series, is named after Lydiard Park, the St.John ancestral home in Wiltshire. Full of portraits and memorials of my family, Lydiard House and adjacent Church of St. Mary's is a writer’s dream. Elizabethan monuments, Jacobean portraits and medieval wall paintings all provide a rich tapestry of images, calling across the ages for their stories to be told.

The characters in The Lydiard Chronicles are all real people, and their stories are drawn from a memoir from the 1660s. By fate—or maybe design—I came upon the 400-year-old notebooks in Nottingham Castle. Written by my ancestress, her vivid account brought my seventeenth-century family to life, and I was determined to honor the truth of her words in my novels.

From the Tower of London, where Lucy St.John lived as the Keeper’s wife, to the battlefields of the English Civil War where brother fought brother; as eyewitnesses to the execution of the King Charles I and allies of the new Republic under Oliver Cromwell; and as Royalist spies and supporters of the restoration of the monarchy, the story of the St.John family weaves through time and place as they observe—and sometimes change—the course of history. 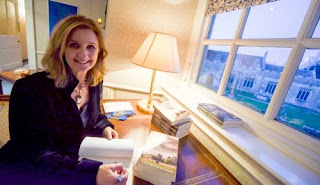 Elizabeth St. John tells this dramatic true story of love and betrayal through the eyes of her ancestor Lucy and her family’s surviving diaries, letters and court papers. Raised in England, Elizabeth St.John spends her time between California, England, and the past. A best-selling author, historian and genealogist, she has tracked down family papers and residences from Nottingham Castle, Lydiard Park, and Castle Fonmon to the Tower of London. Although the family sold a few castles and country homes along the way (it's hard to keep a good castle going these days), Elizabeth's family still occupy them - in the form of portraits, memoirs, and gardens that carry their imprint. And the occasional ghost. But that's a different story... 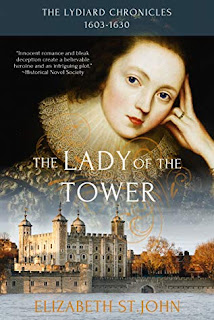 London, 1609. When Lucy St.John, a beautiful highborn orphan at the court of King James, is seduced by the Earl of Suffolk, she never imagines the powerful enemy she creates in his beloved sister, the Countess of Somerset. Or that her own sister Barbara would betray her and force Lucy to leave the court in disgrace. Spirited, educated, and skilled in medicine and precious remedies, Lucy fights her way back into society, and through an unexpected love match, becomes mistress of the Tower of London. Living inside the walls of the infamous prison, she defies plague, political intrigues and tragic executions to tend to aristocratic prisoners and criminals alike.
Now married into the immensely powerful Villiers family, Barbara unites with the king’s favorite, the Duke of Buckingham, to raise the fortunes of Lucy and her family to dizzying heights. But with great wealth comes treachery, leaving Lucy to fight for her survival—and her honor—in a world of deceit and debauchery.
https://geni.us/MyBookLOTT
https://books2read.com/u/b6kgzJ 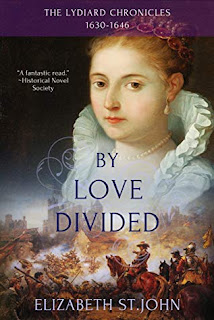 London, 1630. Widowed and penniless, Lucy St.John is fighting for her family’s survival and makes a terrible choice to secure a future for her children. Worse still, her daughter Luce rejects the royal court and wealthy marriage arranged by her aristocratic family and falls in love with a charismatic Parliamentarian. As England tumbles toward bloody civil war, Luce’s beloved brother Allen embraces the Royalist cause and chooses to fight for the king as a cavalier. Lucy is helpless to prevent her family being torn apart, and as war flares across England, Allen and Luce are swept up in bloody battles and brutal sieges as they fight for their opposing causes.
Along with thousands of others uprooted by the turmoil, Lucy, Allen, and Luce face a devastating challenge. Will war unite or divide them? And will they find love and a home to return to—if they survive the horror of civil war. In the dawn of England’s great rebellion, love is the final battleground.
https://geni.us/MyBookBLD
https://books2read.com/u/3kpQYg 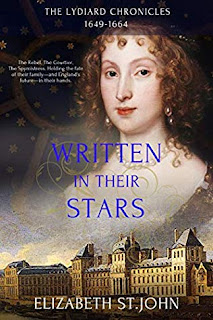 London, 1649. Horrified eyewitnesses to King Charles's bloody execution, Royalists Nan Wilmot and Frances Apsley plot to return the king's exiled son to England's throne, while their radical cousin Luce, the wife of king-killer John Hutchinson, rejoices in the new republic's triumph. Nan exploits her high-ranking position as Countess of Rochester to manipulate England's great divide, flouting Cromwell and establishing a Royalist spy network; while Frances and her husband Allen join the destitute prince in Paris's Louvre Palace to support his restoration.
As the women work from the shadows to topple Cromwell's regime, their husbands fight openly for the throne on England's bloody battlefields. But will the return of the king be a victory, or destroy them all? Separated by loyalty and bound by love, Luce, Nan and Frances hold the fate of England—and their family—in their hands.
https://geni.us/MyBookWITS
https://books2read.com/u/mZBDw5