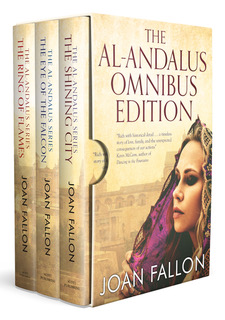 On the mid-week guest spot today, I’d like to introduce Joan Fallon:

Hola,
When I tell you that I moved to Spain in 1998 and ever since have been fascinated by the history and culture of the country, you will understand what inspired so many of my books. I’ve always been interested in history and to find myself living in a country where I knew nothing about its past was a challenge. Everywhere I looked there was evidence of a rich cultural heritage staring me in the face and I knew nothing about it, except the fact that the Moors had once lived here. I was determined to find out more about Moorish Spain and, to be honest, I am still learning.

Although I have always been a voracious reader. Moving to Spain offered me the freedom and the inspiration to write, something I’d wanted to do for many, many years. I had retired from my career in education, where I had been both a teacher and, in later years, a management trainer, so at last I could devote myself full time to what I really wanted to do.

Not all my novels are set in Spain. One is set in the UK, (The Only Blue Door). The others either cover Spain in the 10th and 11th centuries, or the period of the Spanish Civil War. But today I’d like to tell you about the two Moorish trilogies I have written.

The first series is called The al-Andalus trilogy and the action takes place in Córdoba during what was known as The Golden Age of Moorish Spain. The books are about a family of artisans who move to the new city of Madinat al-Zahra looking to make their fortune. Woven in with their stories of love and adventure are the true stories of the royal court—some of which are stranger than fiction.

My latest trilogy, The City of Dreams, follows on from this, but is located in the city of Málaga. The Golden Age was coming to an end, and al-Andalus, once so rich and powerful, was disintegrating into numerous warring city states. I could see it would be a real challenge to make an interesting and cohesive story out of the chaos of the time. The rulers of these city states were lucky if they survived a year or two, and fratricide and patricide was rife. Against this tumultuous  background we meet the younger generation of the same artisan family, who having escaped from the besieged city of Córdoba, are building a new life on the shores of the Mediterranean Sea. The father is a pharmacist, which gives the title to the first book in the trilogy, The Apothecary. He is a simple man who just wants to make a good life for his family, but without realising it, he and his eldest son become implicated in the murder of the reigning caliph, with dire consequences.

Book two in the trilogy, The Pirate, continues with members of the same family, but in this one the main protagonists are the apothecary’s daughter, Aisha, and her new husband, who is kidnapped by pirates. As in many of my novels, the women are strong, independent characters, and although you might think that could not be possible in a Muslim society, what I discovered in my research was that women in 11th century Spain had much more freedom and were better educated than they were 900 years later. Aisha is devastated when her husband is kidnapped and refuses to give up hope of rescuing him, although nobody has the slightest idea where to start looking. Their love for each other helps him to survive his ordeal and gives her the strength to search for him.

All my books are available on Amazon and in on-line bookshops. 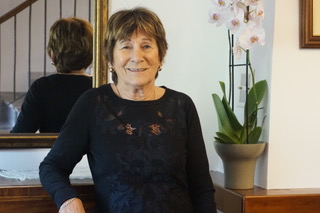