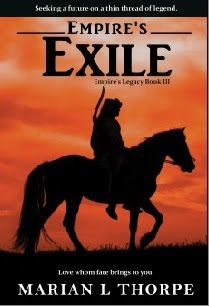 
"Book III of the Empire's Legacy series.“We cannot shape the circumstances to fit our lives, only our lives to fit the circumstances. What defines us, as men and women, is how we respond to those circumstances.” Exiled from the Empire as a traitor, Casyn’s words echo in Lena’s mind. Determined to find Casil, the legendary city of beauty and learning in the East, she travels into long-unknown lands. Her experiences in the first winter leave her scarred and afraid, but, resolving to heal, and supported by an unexpected love, she continues her search. A chance meeting with envoys from the Empire and Linrathe, desperately seeking help from Casil, forces her to a difficult decision.Struggling to keep faith with her choices, facing the almost-certain destruction of her land and her people, Lena’s journey takes her to a deeper understanding of loyalty, sacrifice, and the dimensions of love."

As the blurb states, this is the third book in the Empire's Legacy trilogy, and I've read the previous two. However, for those who haven't, once again Ms Thorpe gives a round-up of the story up to this point, which is a great idea and useful not only to those who might be coming to this book without having read the others, but also as a reminder for those who have, but maybe need a refresher.

I think I enjoyed this book the most of the three. Lena is a thoughtful narrator, always keen to learn from her experiences. She's more complex now as a character because so much has happened to her since the series - and the wars - began. She isn't the only one exiled, and her relationship with her travelling companion, Cillian, is equally complex. He's a difficult character to 'read' and Lena often struggles to work out what he's really thinking. Then, just when she thinks she's got the measure of him, circumstances cause him to show yet another facet of himself. This relationship, as with all others in the series, is believable. All the way through the trilogy, characters like, love or loathe each other and every time, we can understand exactly why. There is no love at first sight, and the characters' feelings develop as they get to know others. It makes for a satisfying read.

Of course, it's not just about the people. There are plenty of nail-biting action scenes and moments of violence and terror. I also shed tears on more than one occasion. The pacing of this novel is excellent, the journeying broken up with plenty of interludes, but always with the focus on reaching the destination. The final outcome is satisfying, with no loose ends and yet... I thought I detected a little glimmer of a possibility for a spin-off series.

This is not historical fiction. The world which Lena inhabits is completely fabricated, but it rings true. With maps, and the use of fictional ancient languages, Ms Thorpe builds a world which feels real, and the people who inhabit it are human; there is no fantasy element, no magic.