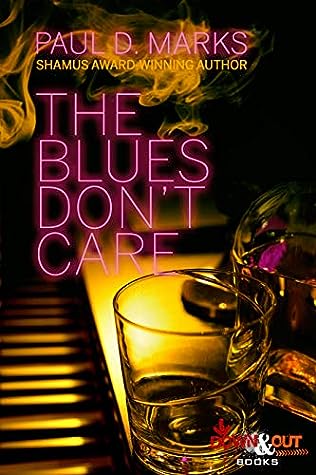 "This story was a breath of fresh air, set in a familiar period, thanks to Sunday afternoon TV movies. Which means the author had to get his world-building right. The good news is - he did, and did it very well indeed. "

"Bobby Saxon lives in a world that isn’t quite ready for him. He’s the only white musician in an otherwise all-black swing band at the famous Club Alabam in Los Angeles during World War II—and that isn’t the only unique thing about him. If that isn’t enough to deal with, in order to get a permanent gig with the band, Bobby must first solve a murder that one of the band members is falsely accused of in that racially prejudiced society."

This story was a breath of fresh air, set in a familiar period, thanks to Sunday afternoon TV movies. Which means the author had to get his world-building right. The good news is - he did, and did it very well indeed.

The story took me right back to Humphrey Bogart, Raymond Chandler, Casablanca and the noir films that I love so much. It is a story bursting with detail of the times, the language, the cars and the minutiae of life. The behaviour of the characters feels spot on. A lot of research has gone on here and the story benefits from it.

It starts in 1999, with a phone call to Bobby Saxon’s daughter. Her father is dead and when she goes to identify him, she meets one of his friends. He has a tale to tell about Bobby’s life in World War II Los Angeles.

Immediately, we are swept into the 1940s, with war in the background, segregation and animosity. Young Bobby is trying to get on in the world; a white boy, he gets a job in an all-black band, playing piano on a gambling ship moored off L.A. While he’s there, he gets caught up in a murder, then in trying to find out what really happened. Already there is tension, suspicion of his motives.

Bobby finds that trying to solve a murder is unlike anything he has ever had to do before. The police aren’t interested, as far as they are concerned they have a suitable suspect. There is no manual to tell you how to be a private detective, Bobby is making it up as he goes along.

The war is  infused into every part of the story, the men are away, the women doing what they can to get by. There are all the essential elements for an engrossing read: good guys, bad guys, gangsters and crooked policemen, and through it all, an extremely well written sense of believable realism. As Bobby starts to investigate, answers lead to more questions. He assembles an unlikely band of helpers as the mystery deepens, and even finds that the part of him that he wants to remain hidden has a role to play in his investigation.

The action (and there is plenty of it) is well described and as tension mounts, the truth is revealed. This novel is not just a murder mystery, there is a lot of social commentary - and definitely a Discovered Diamond.