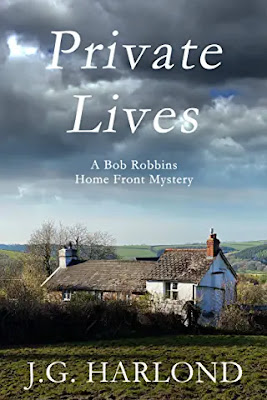 
One of the joys of being a reviewer for Discovering Diamonds is the chance to try books that perhaps you might otherwise have overlooked. Private Lives is a case in point, since it's set in England during WWII and not my usual reading fare. I am so glad not to have missed this gem of a book though.

The story opens with a bang - literally - when semi-retired detective Bob Robbins hears shots coming from a nearby farm. What follows, as Bob is hauled off his holidays and seconded to the local police force, is a murder mystery full of intriguing leads, blind alleys and absolutely stuffed full of memorable characters.


Despite the seriousness of the main subject matter - a death and the strange disappearance of a man whom Bob saw clearly injured who couldn't possibly have walked away (could he?) - there is so much gentle humour. All of the characters are seen through Bob's eyes and his perception of each character is witty. I liked the way Bob thinks and he made me chuckle. His relationship with his dead wife is brilliantly portrayed. We don't get to hear much about Joan, but with a delicious economy of words we find out everything we need to know about their relationship, especially how it's continued since she passed and the exact moment she stopped 'talking' to him following an indiscretion with a lady...


We are also treated to economical description which nevertheless paints the whole scene: the pub is a 'jumble of pint-wielding elbows'.


There are some wonderful period touches, such as the mention of a car's wooden steering wheel, the smell of lavender furniture polish, and some brilliant comedy scenes: Bob's sidekick, young Laurie, has rather too much of the local cider, which, as one of the other main characters, Mrs Flowers, says, 'goes straight to your elbows and knees.' Mrs Flowers runs a sort of boarding house whose residents are mainly members of a travelling troupe of players. At a local village hall one of the players, an Austrian, accidentally turns tragedy into farce, his Teutonic accent becoming more and more noticeable as his distress increases, which is unfortunate in the extreme given the wartime setting. I found myself giggling out loud. The thespians include a light-fingered 'tealeaf' who has deliciously skewed morals. She's happy to pilfer ornaments but draws the line - momentarily - at reading private correspondence. And it's not just the players who provide entertainment. The cook makes some rather bizarre sandwiches...


All of this is delightful, but there is great pathos too. The title of the book is apt and many family secrets come tumbling out. Bob is astute in piecing the story together, although he's sometimes hampered by his attraction to one of the main suspects, but he's also cautious because he is sensitive to the tragedy behind these family secrets. The cook may be a macabre and comedic character, but there's a sad and, as it turns out, inevitable reason for much of his behaviour.

To say any more would be to spoil the brilliant plot. As I said, this book would not be  my usual reading choice and I'm so glad I've read it. Ms Harlond also writes books set in much earlier historical times and, having been introduced to her elegant, witty and accomplished writing, I'm off to look those up.