Daughter of the Forest by Juliet Marillier Reviewed by Lucy Townshend 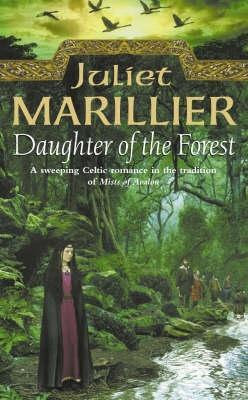 "A magnificent saga set in the Celtic twilight of 10th century Ireland, when myth was law and magic was a power of nature, brilliantly brought to life: the legendary story of an evil stepmother opposed by a seventh child.
A wicked woman, an evil curse, and a love that must triumph over impossible odds.
Set in the Celtic twilight of ancient Ireland, when myth was law and magic a force of nature, this is the tale of Sorcha, seventh child of a seventh son, the forbidding Lord Colum, and of her six beloved brothers.
The keep at Sevenwaters is a remote, strange, quiet place, guarded by silent men who slip through the woodlands clothed in grey, and keep their weapons sharp. For there are invaders outside the forest; raiders from across the seas, Britons and Vikings bent on destruction. But now there is also an invader inside the keep: the Lady Oonagh, a sorceress as fair as day, but with a heart as black as night. Oonagh captivates Lord Colum with her sensual wiles; but she cannot enchant the wary Sorcha. Frustrated in her attempts to destroy the family, Oonagh binds the brothers with a spell that only Sorcha can lift. If she fails, they will die.
Then the raiders come, and Sorcha is taken captive.
Soon she will find herself torn between her duty to break the curse, and a growing, forbidden love for the warlord who is her captor."

Many years ago, I read the Bridei Chronicles by the same author and was recently discussing them with a historical fantasy fan. She recommended the Sevenwaters Trilogy, of which Daughter of the Forest is the first. The first thing to say about this is that it is an absolute brick, coming in at 538 large pages. But settle down, because you'll be glad you have such a chunky story to enjoy. The tale is told by Sorcha, who is herself a story-teller, and the 'voice' changes over the course of the book as she grows up.
The early chapters tell of an idyllic childhood, although always tinged by the sadness of the death of the children's mother, and the ever-present threat of war. Sorcha learns to be a healer, skills that come in handy when she has to tend a wounded soldier, an enemy of her family but one whom we just sense will have a part to play in the story later. Her nursing of this young man (which includes spinning tales to aid his recovery), and the circumstances which cause her to abandon him, will have consequences for both of them. But her story goes in another direction for many years, indeed to a whole new country. The spell which Sorcha must lift requires her to endure such hardship, and has such a strange stipulation, that I wondered how the rest of the story would unfold - surely the author couldn't keep going with this, never mind Sorcha herself? But, she does. They both do. I don't think it's too much of a spoiler to say that it involves Sorcha keeping silent. For a very long time...

This is a sweeping saga, and at times is a real page turner. The pacing is excellent and we are not always on the edge of our seat, but we can never relax for long. There are plot twists and turns, as Sorcha is taken by her captor across the sea, and cannot explain her quest to him or his household, who view her with suspicion as the enemy. The relationships develop beautifully, the secondary characters are well-rounded, and the magic is presented as a fact of life, so that it never feels unbelievable. I was very happy to accept that the brothers were put under a spell, that a fairy queen visits Sorcha in the forest, and that Sorcha can hear some of her brothers talking to her even though they are separated by an ocean. This is because the author fully immerses the reader in this strange, twilight world.

But this is also a historical novel, set in a definite time and place: 10th-Century Ireland and England. Thus, despite being happy to accept the fantasy elements, I was not so happy to accept that pumpkin and turkey were on the menu. Strange what we readers of fiction demand of our authors, isn't it?

The extended blurb for this book compares it to Marian Bradley's Mists of Avalon, and I would concur. If you like big, sweeping stories that combine history and fantasy, you will love Daughter of the Forest. It is a beautifully constructed book and I enjoyed it so much I've bought the other two in the trilogy and look forward to settling down with them. This is cosy, escapist reading, ideal for these times.