A Discovering Diamonds Review of THE TESTAMENT OF LEOFRIC THE BLACK: VOLUME ONE ( 1040-57 ) by EDWARD CARTWRIGHT BEARD 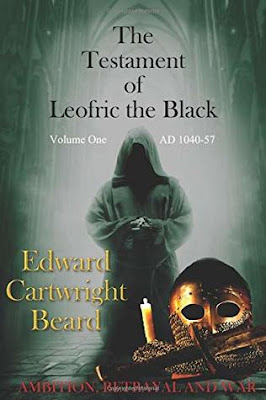 It is 1071 and the (failed) uprising of Hereward in the marshy fens around Ely. Born with a deformity, Leofric The Black, we meet him as he flees the accusation of treachery. He has developed from a child used to taunts and ridicule to a competent Saxon warrior fighting to survive against the conquest of England by Duke William and the Normans.

After the opening scenes we go back in time to when our hero was a boy of nine, and witness his struggles and dreams, his hopes and desires, walking beside him as he grows into a youth and then a man.

Leofric is a very believable character with his additional talents of artistry and skill at illuminating manuscripts. But as with all who hold prestigious gifts he has enemies who are jealous of his prowess and who will stop at nothing to destroy him. Equally, he has friends, Earl Harold son of Earl Godwin (King Harold II) among them.

Blended nicely into the facts of this turbulent and transformation period of English history is a little enchantment and magic in the form of a wondrous sceptre, the old gods and a sorceress. Leoftic’s goal is to find and reveal the real traitor in order to prove his innocence and against all the odds from rivals, the Normans and the supernatural we find ourselves cheering for him to accomplish his destiny.

My only quibble would be the inaccuracy of the helmet on the cover - way too early a style for this period. But I doubt the fault lies with the author, it was probably the publisher's decision.

Through Leofric’s eyes the author paints a vivid, often cruel and vicious, but also emotional and compelling, picture of eleventh century England. This is a debut novel, I believe, and the first of a trilogy – comparable, I would say to any of Bernard Cornwall’s novels, or Helen Hollick’s acclaimed novels of the same pre-1066 period.