The Final Puzzle by Juhi Ray 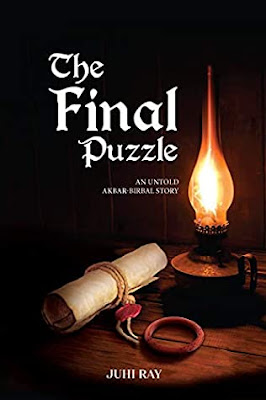 Reading The Final Puzzle has been a privilege: it is informative, entertaining and full of wise words. Superficially, it is a re-telling of part of the reign of the Moghul Emperor Akbar, who ruled for over half a century in 16th Century Hindustan. He is clever, brave and ambitious, so much so he is constantly at war to expand his empire. Akbar is aided in this by his brilliant and equally wise adviser, Mahesh Das, a plain man of humble origins who rises to one of the highest positions in the land, and accumulates numerous jealous, vicious enemies along the way. The shared history of these two extraordinary men, however, is only the top layer of this multi-layered historical novel. Running through the narrative are issues related to religion, gender, love, loyalty and free-will.

After extending his territory to include vast swathes of the Indian sub-continent, Akbar seeks to unite the religions of his disparate territories. It takes many years, but he eventually succeeds in bringing together scholars of the main faiths, Islam, Hinduism, Jainism, and Zoroastrianism, with the aim of finding a way to establish or at least devise a faith that will transcend religious differences and ensure tolerance if non-unity among his subjects. Throughout the story, we see how religious zealots and those who use religion as an excuse to sow discord undermine his rule, and how both he and Mahesh Das nearly die as a result of extremism at their hands.

Issues relating to love and marriage are another theme. Mahesh Das’s wife, Lakshmi (a real person), is so caught up in her unfounded belief that her husband either loves another woman and/or plans to take a second wife that she destroys their marriage. Later, when he is no longer a young man, Mahesh does fall in love, but he has vowed not to take a second wife, and despite the fact that his wife is unsuitable and rejects him, does his best to ignore his heart. The woman he yearns to be with is named Radha.

A free spirit with a mind of her own, Radha frequently dresses as a man to move and act more freely. I’m not sure to what extent the story veers into the politically correct here, but the dilemma Mahesh confronts is subsequently confounded when his royal master offers to take Radha into his harem. Whether or not this is entirely fictional doesn’t matter in the end, though, because it is a touching, grown-up love story with an unexpected outcome – to say more would spoil the book.

Apart from Mahesh Das’s marital problems and Akbar’s thwarted intentions to bring about religious tolerance, The Final Puzzle is a complex tale of good versus evil. The author, Juhi Ray, takes her time constructing the historical background; creating her settings and circumstances; interweaving inter-dependant strands; lightening darker sections with curious anecdotes and beautiful descriptions of places I would love to visit. One of her strengths is her measured pace, although there are frequent moments of high action – when Akbar single-handedly faces down an enraged elephant is one. There are a few very modern American idioms that sound out of place, references to a ‘hitman’ and ‘angst’ for example, which jarred, but this is every historical fiction author’s challenge: how to avoid ‘thee and thou’ pedantry and make an ancient story accessible to the modern reader.

If I have a serious criticism it is that the good are almost too good, and the bad are downright evil, but that is the way of telling an old tale, and the life of Akbar is in many respects a well-known folk tale. For this reader, however, much of it was new and all of it a pleasure to read. Highly recommended for anyone interested in the history of India, or looking for a different kind of historical fiction.

This is a thumping good story, a debut novel that ranks as a Discovered Diamond. I look forward to Ms Ray’s next book.