Portraits of Pretence is the fourth in my planned series of seven novels and is narrated by Samuel Plank, a magistrates’ constable. Magistrates’ constables worked in the brief period – only about fifteen years – between the Bow Street Runners and the establishment of the Metropolitan Police (in 1829) and their role was to execute the warrants issued by magistrates. Sam, however, is a more deep-thinking and curious man, concerned about what drives people to crime, and how to make them reconsider. As Sam performs his duties under instruction from the magistrate, John Conant, he is accompanied by a younger constable, William Wilson, who is gradually learning how to curb his youthful exuberance and mature into a man who thinks before he speaks or acts.

On the home front, Sam is devoted to his wife Martha. It is their shared – but usually unspoken – sadness that they have no children, but their love for each other is plain in every action. Martha, of course, cannot hope to hold any position of authority in society, but is of inestimable help to her husband when he brings his cares and concerns home to her. In this novel – which focuses on the burgeoning trade in French art, both genuine and fake, in the years after the Napoleonic Wars – Sam has dealings with an expert in French miniatures, a Monsieur Causon. And on his final visit to Causon’s home, he plucks up the courage to mention a topic that has been much on his mind and in his heart:

Conant had been right in his estimation of Causon, and as we were walking towards the door I decided that I too would put my trust in this man. “Mr Causon,” I said, “my wife and I have been married for twenty-five years.”
“My felicitations, sir, to you both.” Causon stopped and smiled but looked puzzled.
“I am not a man of lavish display, Mr Causon,” I continued, “but I love my wife very much. And I saw the great pleasure she took in looking at that miniature – how she enjoyed having something beautiful to admire. I could not offer her Elizabeth, the girl in the miniature, but I think it would be fitting for me to mark the occasion of our anniversary with something,” I waved my arm to take in the crowded cabinets and walls of the drawing room, “something of note. You are obviously a man of experience in these matters, and it would be of great assistance to me if you could suggest…” I shook my head despairingly. “I know my wife, sir, but I know nothing of this world of beautiful objects.”
“Then we are a good match, constable, and between us we shall fix on the right thing.” The Frenchman led me back to the armchairs and we both sat down.
“Your wife, sir,” he began, “is she very feminine – taken with pretty little things and dainty items – or more practical in her tastes?” I stared at him mutely. He tried again. “Her night-dress, let us say: does it have much lace at the collar and hem?”
I felt myself redden slightly, but I could see the method of his approach. “A little lace, yes, but Martha – Mrs Plank – places more importance on the quality of the fabric than on its adornments.”
“Perhaps that is why she chose to marry a constable,” said Causon. “And it is almost certainly why that constable still values and admires her so many years later.” He stood and walked over to a glass-topped cabinet, looking at its contents for a few moments before saying, “Ah,” quietly to himself and sliding out the drawer. He picked up a small item and brought it over to me, placing it in my open palm. It was a ring, quite simple and yet substantial and obviously of excellent quality. Around the plain gold band were held six coloured stones: two large central ones flanked by four smaller ones. 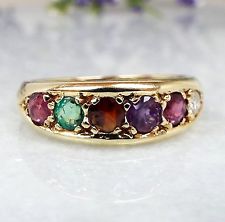 “It is known as a regard ring,” said Causon. “Each of the stones provides a letter to spell out the word, so you have a ruby, then an emerald, a garnet, an amethyst, another ruby, and a diamond. Regard.”
I turned the ring to the light and imagined Martha’s surprise on seeing it. Causon had chosen perfectly. Regard.
Not as showy or as brilliant as passion, to be sure, but much more lasting.

By day I am an anti-money laundering consultant – advising businesses on how to avoid ending up with criminal money – and my obsession with ill-gotten gains has informed my fiction.  I am in the middle – well, four down, three to go – of a series of seven novels set in 1820s London and narrated by magistrates’ constable Sam Plank.  Quite how I will cope when he retires in 1829, I don’t like to think.  I am somewhere between my prime and not a spring chicken any more; I live in central Cambridge with my husband and the tabby Magnificat, and often hide away in the University Library to spend time with Sam.  Outside financial crime, I knit, eat good quality dark chocolate and am a tandem stoker (the back half who does all the hard work).