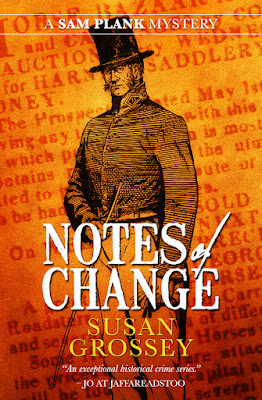 Amazon UK
Amazon US
Amazon CA
Amazon AU
Goodreads
Murder mystery
1800s
London, England
This is, I believe, the last in the Constable Sam Plank Series, and it's the second that I have read. Sam Plank is an engaging character and a jovial narrator. He takes his job as magistrate's constable in early nineteenth-century London very seriously, but he is very much not full of his own importance and he knows that if he ever gets too puffed up with pride, his sensible wife Martha will soon prick his pomposity. The plot in this latest - and last - outing for him revolves around a murder, and the passing of counterfeit notes. Are the two connected? It's Sam's job to find out, assisted by the 'young' Wilson who, having worked alongside Sam for many years, is now applying to become a member of the newly-formed Metropolitan Police.
I mentioned that this is the second book I've read, and I think it's pertinent to say that the first one I read was #4 of #7. I say this is relevant because whilst this is a series, the books can definitely be read as standalones. Ms Grossey gives just enough background information for those meeting Sam, Martha, Wilson and all their colleagues and friends for the first time to feel they've not missed anything vital. The books are beautifully written and London in the post-Napoleonic era is vividly portrayed.
Inevitably, with the conclusion of a long-running series, there are threads to be tied, and this has slightly less murder/mystery/crime-solving content than the previous book I read, simply because there's a sense of change: Wilson is considering his future, and so, in a way, is Sam. In what I imagine is a slight departure from the norm, it is not only Sam's colleagues and friends who make reappearances, something which will no doubt delight readers who've devoured all the books from the very first, but newer readers are given enough information that they won't be confused.
I thought it very fitting that the author chose to end the series at a point in Sam's life when the very nature of the job is about to change (and the title, in that regard, is brilliant). Luckily for the reader, even in this last adventure, the nature of crime remains the same.