The Steel Rose: By Nancy Northcott 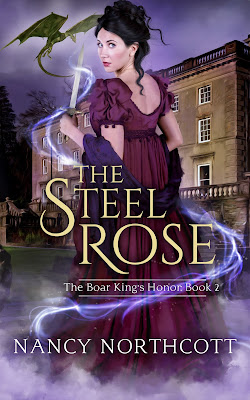 Fictional Drama/ historical fantasy
14oos / Richard III / Napoleonic / multi
England
The Boar King's Honor Trilogy Book 2
Very exciting and crafted with skill.
This is a fast-paced and exciting story that fits in a number of genres – historical fiction, historical fantasy, magical fantasy, Regency, time-travel and romance. Lovers of all those genres will enjoy it, for it’s much more than any single category. Even though it’s the middle book in a trilogy, it works very well as a standalone novel. I was unaware of its ‘middle child’ status until the very end and it didn't matter.
Widowed Amelia, with very advanced magical Gifts, is seeking to lift a curse set on her family in the time of Richard III. The stakes rise – Napoleon escapes from Elba, aided by French wizards. His grand plan is to conquer England. Amelia is in grave danger from a rogue English wizard who wants to either control or neutralise her powers. He’s also a traitor to his country – aiding the French for his own nefarious purposes. Enter Julian, close friend of her now-deceased brother Adam. Julian's help is needed (he's a powerful, influential and highly Gifted wizard.) The two form an alliance. They’re assisted by Amelia’s long-deceased grandparents who, very conveniently, pop in and out of current time, reporting what’s going on in other places and training the young couple with more advanced Gifts.
The story has a tight and well-constructed plot. Within its fantasy boundaries, the many twists and turns are believable, the characters are well-developed, and the history is well researched.
On a personal note, I delighted in the ‘About the History’ end notes, when Northcott credited Josephine Tey’s book ‘Daughter of Time’ as the trigger for her interest in the controversy over Richard III. It had the same impact on me – to be aware that accounts of historical events are written by the victor and might not be true.
I thoroughly recommend this book and look forward to the third in the trilogy.
Reviewed for Discovering Diamonds