Some Rise by Sin by Siôn Scott-Wilson 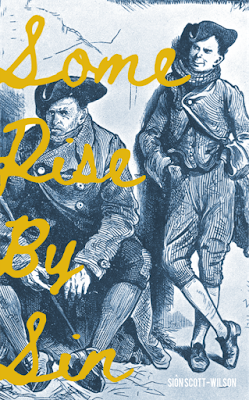 "1829 is a tough year to be a body snatcher. Burke and Hare have just been convicted of killing people to sell their bodies, to widespread outrage—but despite the bad press, doctors still need fresh corpses for medical research.
Sammy and Facey are a couple of so-called ‘resurrection men’, making a living among society's fringe-dwellers by hoisting the newly departed from the churchyards of London whilst masquerading as late-night bakers. Operating on tip-offs and rumours in the capital’s drinking dens and fighting pits, the pair find themselves in receipt of some valuable intelligence: an unusual cadaver has popped up on the market, that of a hermaphrodite. For any medic worth his salt it’s a once-in-a-lifetime opportunity—a medical curiosity and rara avis—and famous anatomist Joshua Brookes commissions the two men to obtain the body, at any cost. But some corpses hold secrets, and before long the enterprise becomes a deadlier and more complex undertaking than either man could ever have imagined."
To pick up this book and start reading is, I think, as close as you'd ever come to knowing what it would be like to suddenly find yourself in early 19th-century London. Sammy is an eloquent narrator but he speaks the language of the streets, and since he is our guide, we quickly get used to the particular speech eccentricities that these characters have.
There is so much delicious detail, from scenes inside the drinking houses, to the greasy feel of trousers. The sights and sounds of a pulsing London are vividly captured and the city is a character in its own right, playing a huge part in the story.
Sammy and Facey walk many miles, and you get the sense that London pavements were just as hard then as they are today. There is poignancy, with the two little brothers, both called John, who rely on each other and the 'ne'er-do-wells' of their acquaintance, and Rosamund's habit of always smiling behind her hand, so conscious is she of her chipped teeth.
I applaud the author's logistical skills, in corralling so many major and minor characters, all of whom burst onto the pages and make themselves known in a few brief sentences, giving us their back story, their idiosyncrasies, and often providing light humour. I especially liked the minor character who'd had a full set of the finest ebony teeth made, but wondered plaintively whether ebony should in fact splinter so easily and taste of boot polish...
The plot is a lot more intricate than the blurb suggests, and the hermaphrodite's body is not the only one that gets Sammy and Facey into trouble. Again, I have nothing but admiration for the way the author keeps track of the plot. It's easy to read, but must have been one heck of a challenge to write!
Scott-Wilson cleverly avoids making overt statements about wealth / poverty / inequality, and there are no stereotypes here. There are good and bad people on both sides of the socio-economic divide, but one thing is made clear, though again, subtly done: literacy is empowering.
Sammy is an astute young man, able accurately to assess the people who come in and out of his life, but he's equally good at showing us his own character, with all its faults and strengths. Again, hats off to the author for this achievement, something which is quite difficult to pull off when writing in the first person.
My only negative criticism is for the cover: the image is good but the title font and placing could have been better, and what a shame that the author's name is not more prominent - it can barely been seen, especially at thumb-nail size.
I'm not sure I've read a book quite like this one. It's different, it's quirky, beautifully imagined and executed, and stylised without ever becoming pretentious.
Highly recommended.
Reviewed for Discovering Diamonds
© Annie Whitehead
e-version reviewed