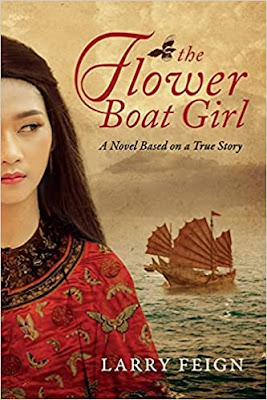 Amazon UK
Amazon US
Amazon CA
Amazon AU
Goodreads
Fictional Drama / Fictional Biography
19th Century
China
"South China coast, 1801. Sold as a child to a floating brothel, 26-year-old Yang has finally bought her freedom, only to be kidnapped by a brutal pirate gang and forced to marry their leader. Dragged through stormy seas and lawless bandit havens, Yang must stay scrappy to survive. She embeds herself in the dark business of piracy, carving out her role against the resistance of powerful pirate leaders and Cheung Po Tsai, her husband's flamboyant male concubine. As she is caught between bitter rivals fighting for mastery over the pirates-and for her heart-Yang faces a choice between two things she never dreamed might be hers: power or love. Based on a true story that has never been fully told until now, The Flower Boat Girl is the tale of a woman who, against all odds, shaped history on her own terms."
Set in the early 19th century, The Flower Boat Girl is the story of Shek Yang (Cheng Yat Sou), who rises from being sold into the sex trade as a young girl to becoming the most powerful female pirate known to sail the South China Sea. Soon after the death of her newborn brother and her mother, Shek Yang’s father sells her into prostitution where she finds herself working on a Flower Boat, a floating brothel. It is here that she meets her future husband, Cheng Yat. The two have a violent encounter and he declares, “Beautiful as a butterfly, fierce as a tiger”. After he kisses Shek Yang, he continues, “Tell the crew I’m taking a wife”.
When Larry Feign first learned about Cheng Yat Sou, he became fascinated with this woman whom he believed was strong, sharp, and a force to be reckoned with. After some research, he told his wife, Dr. Cathy Tsang-Feign, PhD, that he wished he could find a book about this notorious pirate queen. His wife’s response was "Write the book", and this he did. Feign dove deeper into his research focusing on local folklore, ship technology, and the culture. The result is this fictional biography based on the true story of Cheng Yat Sou.
Initially, the harsh and violent culture of the 19th-century pirate life that was depicted through vivid, and sometimes unrefined, language was surprising. However, as I took into account the true risks and perils of the pirate lifestyle, I realized that Feign did an outstanding job painting what was the genuine culture. Once I realized this, I was able to pick up the rhythm and the beat of the story. I was able to grasp a deeper understanding of what it took for Cheng Yat Sou to rise to the status of Pirate Queen.
Feign, as a master storyteller, tells a gripping tale of genuine pain and how one woman’s pain helped her to find the inner strength to not only survive, but to find a life that she, and others, would never have imagined for a lowly flower boat girl. While reading the novel, I became absorbed in Cheng Yat Sou’s story. Like Feign, I found the need and desire to learn more about this woman. And, like Feign, I discovered that there were only bits and pieces of information, mostly legend, with the most interesting being that the character Mistress Ching from the film Pirates of the Caribbean: At World’s End was based on the life of the real Cheng Yat Sou (or at least her legend).
Reviewed for Discovering Diamonds