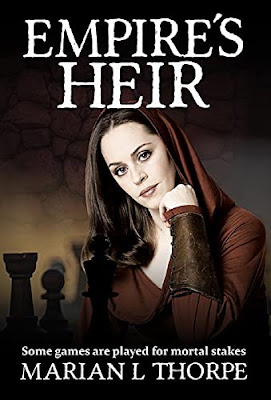 "Gwenna, heir to Ésparias, is summoned by the Empress of Casil to compete for the hand of her son. Offered power and influence far beyond what her own small land can give her, Gwenna’s strategy seems clear – except she loves someone else.
Nineteen years earlier, the Empress outplayed Cillian in diplomacy and intrigue. Alone, his only living daughter has little chance to counter the Empress's experience and skill. Aging and torn by grief and worry, Cillian insists on accompanying Gwenna to Casil.
Risking a charge of treason, faced with a choice he does not want to make, Cillian must convince Gwenna her future is more important than his – while Gwenna plans her moves to keep her father safe. Both are playing a dangerous game. Which one will concede – or sacrifice?"
This is the sixth book in the Empire's Legacy series, and by now these characters (I've read all the books) feel very familiar to me. Marian Thorpe has invented a complete world, drawing on extensive research of ancient civilisations, so that we have languages that are based on Old Norse, societies that are based on Roman history, etc, but she brings all those elements together and creates something entirely new, but which also feels like real, ancient history. After having read the five preceding books it was, for me, a little like picking up a book set, say, in Tudor England, in the way that the backdrop, the languages, the geography, all feel completely real and recognisable. Just as we can all imagine ourselves in the court of Henry VIII, so I can now just as easily imagine myself within the walls of Casil, or at Linrathe.
Does this mean that you can't read this book as a standalone? Absolutely not. The author helpfully gives a round-up of the story so far, explains the languages and everything else you need to know, and Empire's Heir has a solid, satisfying ending, with all threads neatly tied.
Gwenna has grown up a great deal, and is one of the narrators of the story (the other being her father, Cillian). This isn't really historical fantasy, it's just set in an alternate world, and the characters are all very real, and very human. The plot is full of twists and turns, there is intrigue especially, and incredibly clever politics. There is high drama, plenty of jeopardy, and yet this, like all the previous books, is character driven. The relationship between Gwenna's parents, the relationship between Sorley and Druise, and how the four interact, would not be so affecting were the characters not so beautifully drawn and developed. In this story, with Druise back where he grew up, another element - that of his old family life - is introduced. I won't say any more, for risk of spoilers.
I liked the device whereby Gwenna and her father take turns with the chapters, so the point of view switches with alternate chapters. And so we see the story from the father's eyes, and the daughter's eyes.
Honestly, I think this book has it all: tight plotting, strong characters, action, danger, drama, and pathos.
Another great offering from a skilful hand.
Reviewed for Discovering Diamonds