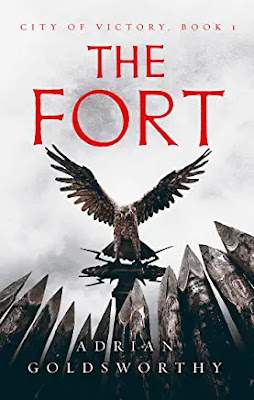 Military/Fictional Saga
AD 105
Rome
#City of Victory #1
This is war – the Romans vs. the Dacians. And it took three goes to settle it. The first was by Domitian in AD 87-8 and second and third under Emperor Trajan. The conflicts were triggered by the constant Dacian threat to the Danubian province of Moesia plus the increasing need for the Romans’ need for economic resources.
Truces were made and broken by the Dacians. Trajan recommenced hostilities against Dacia and eventually defeated the Dacian king, Decebalus, at the second battle of Tapae in AD 101. But as we see in The Fort, Decebalus’s resentment grew and simmered. This is where the story starts, in AD 105, inside the head of Brasus, who will become one of the secondary level Dacian war leaders.
When I took on reviewing The Fort, I was rather nervous. Adrian Goldsworthy is an eminent historian of the Roman world; his Augustus: From Revolutionary to Emperor is the definitive history of Rome’s first emperor and sits in a prominent place on my bookshelf. But this anxiety evaporated as I quickly became absorbed in the story.
I knew I didn’t need to worry about the authenticity of the period detail, especially every aspect of Roman military life of which Goldsworthy is a master. But it’s not a dry rehearsal of battle tactics and ‘bash and clash' scenes. Here, we live the day-to-day, logical and tough life of Roman military, and the sheer courage of the Brigante troops. Goldsworthy is a master of using the scarce information available to us and filling the rest in intelligently and vividly.
His characterisation is sharp, from the aptly named main character Centurion Ferox to historical figures such as Hadrian and Lepidina (she of the Vindolanda tablets). He cleverly mixes the known historical figures with Ferox, Claudia Enica, a Romanised Brigante queen descended from Cartimandua (and who is Ferox’s wife), Romans desperate to be relieved and go home once Ferox arrives, loyal veterans and treacherous deserters.
Hadrian is drawn as clever and ambitious, a successful manipulator of men who has no compunction about sacrificing others for the good of the res publica of Rome.
Brasus the Dacian is dedicated to his king and to the holy task of ridding his country of the sacrilege of the presence of the ‘unbelievers’, the Romans. In between the scenes featuring Ferox, Hadrian, and occasionally other characters, we return to Brasus and see his beliefs change and his faith waver.
The author gives us no illusions about the brutality and directness of life at the start of the second century AD. We see the Roman world in tooth and claw, especially the hierarchical power plays. Yet there is wit and banter between the characters, even when under terrifying siege; anybody military will recognise this gallows humour.
My only constructive comment would be that maybe a map and a character list would be helpful for readers who might not know exactly where Dacia was, or might get confused about the large list of characters with unfamiliar names. (Although maps and character lists are not always easily accessible in e-versions.)
The Fort builds slowly but inexorably and is laced with foreboding from the beginning. The climax is inevitable, but the tension never ceases.
Highly recommended.
Reviewed for Discovering Diamonds