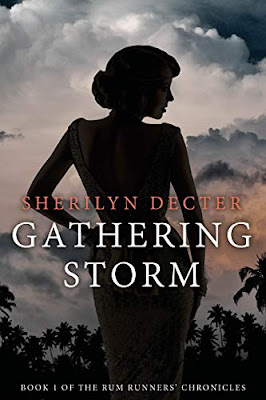 Amazon UK
Amazon US
Amazon CA
Goodreads
Fictional Drama
1930s / Prohibition
America
Book 1 The Rum Runners Chronicles
"Florida Coast, 1932. Edith Duffy might be grieving her gangster husband’s death, but she’s no damsel in distress. Leaving the sordid world of Philadelphia bootlegging, she settles in a small town outside Miami and buys a speakeasy. But when she launches a lucrative rum-running operation, indignant locals conspire to destroy her. Edith lands squarely back in gangland culture, with a Bible-thumping preacher campaigning to shut her down and smugglers resentful of her skill. And now she must forge alliances and make unlikely allies just to survive. Luckily, her mentor is none other than the wife of the notorious Al Capone…"
After the violent death of her husband, Mickey Duffy, Edith Duffy leaves Philadelphia for the sunny shores of Miami, Florida. Edith’s dream is to start a new life where she can become an independent woman who is not resigned to living the life of a gangster’s wife. With the help and encouragement of Mae Capone, Edith sets out to start her new life. She discovers, and then buys, a run-down place called Gator Joe’s in the small town of Coconut Grove. However, as Edith soon discovers, redefining herself and becoming her own woman, away from the mob life, will not be easy.
Writing in the present tense, Sherilyn Decter does an excellent job weaving the history of the period into the story she tells in Gathering Storm. Although the story is fiction, Decter skillfully captures her readers’ attention by using real names of people who lived during this time and providing just enough background information about the characters and the events to bring the novel to life. Decter’s research about the Miami area and the characters is extensive, and this is what works as we live Edith’s life after Mickey’s death.
Edith is a strong woman, but not a perfectly strong woman. Even though she is smart and can find ways around most of the obstacles that appear on her path to independence, Edith still finds it challenging to walk away from the gangster life. This challenge is mostly because her redefined life involves running a speakeasy, as a woman, during Prohibition. As you follow Edith’s journey, you feel the ups and downs of her life; you feel her triumphs and failures.
As a reader I found this novel a page turner. The only pause I initially had was the purpose of introducing Cassie, Leroy, and the tarot into the story but after reading the author’s notes, and then going back for further reflection, I realized that the tarot and young Leroy were intended to help Edith make wiser choices.
My fascination with this time in history started in 1967 when I watched Bonnie & Clyde in the theatre. Then, in 1969, The Godfather by Mario Puzo was published. In 1970, I found a copy of the book under my dad’s recliner. Of course, as a 15-year-old rebel, I had to read this book, which I later discovered was on a banned book list in our community. Between the movie, the book, and then, eventually, learning of my dad’s connections to law enforcement during this time, I was fascinated with the Roaring 20s, the Great Depression, Prohibition, and the lifestyles of the people made famous from this period.
When my dad realized the extent of my fascination, he was quick to point out that even though fictional film and literature often depict this era as glorious and exciting, the reality was that “it was not,” especially for women.
Decter addresses this point early on in Gathering Storm when she shares Edith’s reflection after she removes her wedding ring:

A final tug and the ring slips off and rattles against the porcelain. Edith stares at her naked finger. That gold band has ridden there for almost a dozen years. A golden noose.

“And now it’s off.” She flexes her fingers. It doesn’t feel any lighter, any looser.

It is this one passage at the beginning of the novel that reflects the main idea of the story and foreshadows the reality of Edith’s journey.
Reviewed for Discovering Diamonds