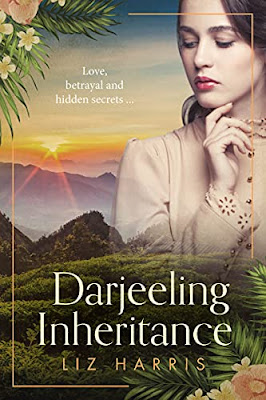 Fictional Drama / Romance
1930s
Northern India
Set in the tea-gardens of northern India, in the shadow of the Himalayas, The Darjeeling Inheritance opens with Charlotte Lawrence returning home from eleven years of schooling in England to an abandoned house. No family; no servants; only dust hanging in the sunshine in empty rooms.
From this atmospheric beginning, author Liz Harris captures the feel of the tea plantations of the Himalayan foothills with snatches of detail: the pungent smell of the growing tea; the rapid, precise work of the pluckers; the peaks of the mountains dominating every time you look north. Rain on the tin roof; the incessant, monotonous buzz of insects and the bird calls that cease only in the hottest hours, and the vista of sculpted, stepped terraces of tea bushes encircling the hillsides. Charlotte has longed for this landscape, dreamt of it as an escape for all her years at boarding school, but her return is not the homecoming she expected.  Her father has died, and while he has left Sundar, the plantation, to her, she discovers from her grieving mother that she is also expected to marry Andrew McAllister, the son of the neighbouring tea plantation.
The year is 1930, and changes are beginning to creep their way up the mountainsides and affect the lives of the men and women – European and Indian – of the plantations. The men once employed to look after horses now also drive and maintain cars. A lawyer named Mohandas Gandhi is leading a movement for Indian rights, including the abolition of the salt tax. So when Charlotte insists she will run Sundar, it is one more ripple in the tide of progress, but not one easily accepted by the conservative society of the tea plantations.
From this opening of both personal and political challenge, the story focuses only on the personal: Charlotte is not ready to marry; Andrew is not quite ready to settle down; the woman who accompanied Charlotte to India, serving as her chaperone but travelling to marry a neighbouring planter, is a disruption to their ordered lives. The manager of Sundar, who agrees to teach Charlotte all the details of tea production, occupies more and more of Charlotte’s thoughts. The twists and turns of romance play out against a background of the seasons of both the tea gardens and the social lives of the planters, but the greater political and historical aspects of life in India in the 1930s are not part of the story except for the briefest of mentions.
The Darjeeling Inheritance is an entertaining, well-written historical romance, well-rooted in its geographic setting as seen through the eyes of the British, who, to be fair, up in remote and isolated foothills of the Himalayas, were not likely to be paying much attention yet to the inevitable transformation of India.
Recommended for readers who want a well-constructed story set outside Europe or North America.
Reviewed for Discovering Diamonds