The Lines Between Us by Rebecca D’Harlingue 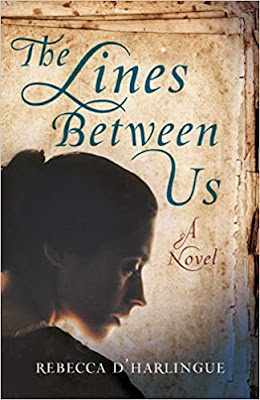 Dual time line/ family saga
17th and 20th centuries
Spain, Mexico and U.S.A.
Anna is a childless widow. After her husband’s death, she reads his journal and learns things that both comfort and distress her. Although theirs was a marriage of mutual respect and affection, he confided things in his journal which he never confided to her. This is an ongoing theme. In this story, journals provide the bond between generations. They tell the stories of Spain when the Inquisition is still active, and colonial Mexico, and three women forced by their times into lives they never would have chosen.
Anna’s brother is a self-absorbed widower who has removed all reminders of his wife from the house and will not allow her name to be spoken, although he puts it about that she died in childbirth. His daughter Juliana is a serious sixteen-year old. One day, Sebastian, Juliana and Juliana’s duenna disappear. Anna is distraught and although she has seldom travelled, she goes to Sevilla to search for them. At her brother’s house, she found Juliana’s journal and reads it while in Sevilla. When she discovers the horrifying reason for her beloved niece’s disappearance, she abandons the search.
At this point, the narrative fast-forwards to St. Louis in 1992 and Rachel who is at the bedside of her mother, Helen. I have read just a few dual time-line books, but this was a sudden and acute dislocation. I was invested in the Spanish characters and wasn’t ready to leave Sevilla with Juliana’s fate yet unknown.
However…
In the moments before her death Helen mentions Anna and Juliana, people whom Rachel has never heard of. Going through her mother’s things later, Rachel finds papers and a journal that have been left specifically to her own daughter. She cannot resist reading and thus establishes a connection to people long dead and has a better understanding of her own mother.
The author has clearly immersed herself in 17th-century culture. The voices of the characters are authentic and the prose is one of the best features of the book. Example: ‘I know that our suffering is slight relative to what others have to endure, but weighing sorrow does not lessen pain.’ I found these words particularly moving.
All in all, an excellent book emphasising our connection to the past and with surprises along the way and a shocking ending.
Reviewed for Discovering Diamonds