A Discovering Diamonds Review of Workhouse Waif by Elizabeth Keysian 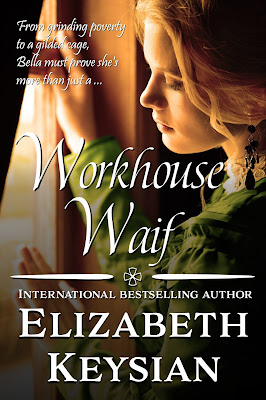 fictional drama
1800s
England
"How can Bella Hart escape the hell of the Victorian workhouse? Fleeing the abuse that she suffered there, the lonely outcast hopes her new life in a factory town can provide the esteem and affection she craves. Torn between the worlds of masters and workers, Bella falls for the enigmatic Jack, but their relationship shatters when his true identity is revealed. In a desperate bid to revive her love, Jack unearths Bella's past, with tragic consequences. After a devastating fire, a secret emerges that seals Bella's fate, and that of everyone and everything she holds dear. Fans of Catherine Cookson and Victorian historical romances will love this book."
I read the book before I saw the official blurb and am glad that one of my initial thoughts was confirmed: Catherine Cookson fans will enjoy this. I really do mean that as a compliment, because I found that this book sits fairly and squarely in that sub-genre, and is a fine example of it.
Meeting Bella when she is a young inmate of the workhouse, we can fully understand what drives her, how her thought processes work, and how her childhood experiences shape her personality and affect her decisions. She's a rounded character; believable, and likeable. She's a product of her age and upbringing and inhabits the era perfectly. (So be warned: towards the end of the book she has a very 19th-century reaction to something which these days would not shock such a young woman in quite the same way. But I felt this made her a much more 'real' character).
Romance perhaps isn't my 'thing' but it didn't stop me enjoying this very tightly-plotted book. The twists and turns of the story are handled well, and although some characters are better drawn than others, none is a stereotype. I particularly liked Georgie Merriweather, who introduced himself to the reader by delighting in playing throwing games with his hat in a railway carriage.
I'd say that all the expected tropes for this type of story are there, but they are presented plausibly and the ups and downs of the story are well paced.
I think the author was brave in her choice to make her characters speak 'bad' English, which made them come alive. Bella and her fellow workhouse inmates frequently say 'would of' instead of 'would have', whereas the more educated characters speak correctly. Bella also has to remember to say 'my' instead of 'me' when talking to the posh folk e.g. 'A home of me own'. The way the less educated characters speak is refreshingly different from some other portrayals. The little errors in their speech were there, but were never annoying or overdone.
The only slight niggle I had was the frequent 'head-hopping' in the earlier chapters, where the point of view changed rapidly from paragraph to paragraph but this became less of an issue as the story progressed.
There were some lovely keen observations of a changing world. This is not a country full simply of 'rich' and 'poor'. Here, in an increasingly mechanised world, we have the industrialists, the nouveau riche, looking down on the workers, while the aristocracy, in their turn, look down on the mill owners. The historical setting was good, the characters lived and acted within that world, and the story-telling was great.
Reviewed for Discovering Diamonds
© Annie Whitehead
e-version reviewed