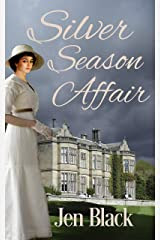 Romance
1911
England
"Having married into an aristocratic family in Yorkshire, American Ellen desperately needs a child. The family expects an heir. After three years with a loving husband it seems the desired child will never arrive, and when a dangerously attractive estate worker makes an outrageous suggestion, Ellen is mortified. She dismisses the idea, but the temptation becomes irresistible and in the steamy sensuality of the long hot summer of 1911 desire consumes them both, with dire consequences for one of them."
It is 1911 and the heatwave that will plague England over the summer months is already becoming a nuisance. Or so Ellen thinks as she wanders off on a solitary walk, preferring to walk through the woods to avoid the heat. And there, just beside the gazebo she bumps into one of the gardeners.  Yes: it must be the heat. How else to explain how the wife of Charles, Lord Dipton and future sixth Marquess of Durrington, allows this unknown gardener to lead her inside the gazebo and there seduce her?
I must admit to having some initial problems with the premise. Ellen and her husband are desperate for a child—Charles’ grandfather is threatening to disinherit him unless there is the pitter-patter of small feet—but Ellen is also very much in love with her husband. She is also a lady, very aware of her station in life and in general not at all reckless. For such a woman to leap into the arms of one of the estate workers…well...?
While it would—perhaps—have been credible to have Ellen consider just how to sort the child issue and do whatever she had to do (with closed eyes) to present Charles with the much-needed heir, what blossoms between Ellen and Tom is instant, fiery passion. This is not a solution to Ellen’s problem. In fact, it adds another complicating twist.
However, I may have had reservations about this premise, but Jen Black is an admirably competent writer. Not only is she adept at recreating the historical setting, she is also skilled at presenting us with complicated characters. In this case, it is Tom who turns out to be as multi-layered as an onion, much to the surprise of, among others, Ellen’s husband, Charles.
The heat builds and builds. In casual bits and pieces, Ms Black presents the growing political friction in Europe. In England, there is a new king to crown, a young Prince of Wales to invest while the nation pants under a relentless sun. For Ellen, tension spirals, making it unbearable to see Tom, just as unbearable not to see him. Plus, there is Charles, the man she truly loves and admires.
And then finally, the heatwave breaks. The heavens crack open and in the resulting storm, life will be irrevocably changed for Tom and Ellen. This reader found herself reaching for the tissues repeatedly as the final chapters of Silver Season Affair rolled by.
Always a sign of a good read!
Reviewed for Discovering Diamonds
© Anna Belfrage
e-version reviewed
this title was featured in our Cover Critique spot