A Discovering Diamonds Review of The Heron – Jean M Roberts 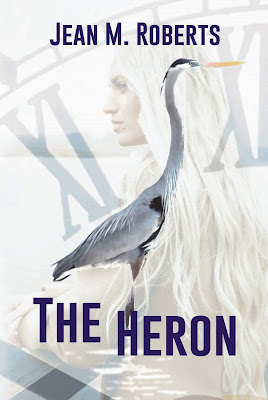 fictional drama / time slip
17th century/ modern day
New England
Historian Abbey Cootes, recovering from an accident in which her fiancé, Bryan, is killed, wins a holiday to an historic guest house in New England, though she doesn't remember entering her name for consideration. From the moment she arrives, she has strange moments when she experiences Pine Tree House, inside and out, as though she is walking there in the past.
The owner, Miriam, and the cook, Jeremiah, admit they have brought her here under false pretences, to try to communicate with Mary Foss who lived here in the 17th century and haunts the place. Abbey is a descendant of the same family, and the blood tie could make her susceptible, as it has with others. Miriam is descended from Mary's faithful housemaid, whose name she has assumed; and though Jeremiah at first appears to have no historical counterpart, he too experiences time-slips.
At any time of day or night, without warning, Abbey finds herself occupying Mary's body, and seeing events through her eyes. Mary is tricked into marrying William Foss, though she is in love with his friend Benjamin. The latter is reported to have been lost at sea, and William will settle her father's debts if she marries him. The marriage is not a happy one, and when Benjamin returns, safe and well, she loses all trust in her husband and he in her.
The story of their love triangle is set against the background of Indian and French attacks on the settlements and dwellings. Mary is showing Abbey her story in chronological order. She leaves physical clues in the present day, and mentally directs her to  different sites where the events occurred. A heron is often seen watching the modern household, and Abbey finds long grey feathers on her pillow.
As the bond between Abbey and Mary grows stronger, and Jeremiah becomes linked to Benjamin,  Mary's hold on her grows more determined, and the parallels between their two lives become clear. Mary's husband is physically abusive, as Bryan was, and threatens to kill her, which could mean killing Abbey, too; but Abbey needs to know how Mary's story plays out.
The author has set the novel in the coastal area occupied by her settler ancestors, four of whom died in the massacres referred to, though the tangled relationships are fictitious. Her thorough grounding in the historical events gives authority to the 17th-century scenes of a precarious domestic existence set against a backdrop of ever-present mortal danger.
The modern sections are more sketchy, and in the pre-publish ARC edition there was a frequent lack of italics for thoughts throughout. Similarly, aargh, harrumph and um could either have been removed or italicised;  rouge should be rogue on at least two occasions. Hopefully these errors have been corrected in the final version.
Overall it is a satisfying, dramatic, novel, well-researched with its voice authentic, and it holds the reader to the last page.
Reviewed for Discovering Diamonds
© Lorraine Swoboda
e-version ARC reviewed