A Diamond for Her, by Mark W Sasse 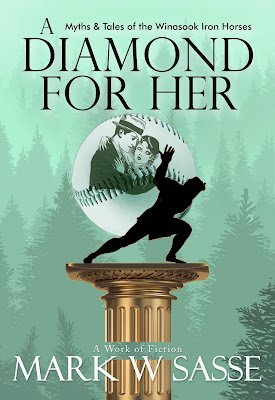 fictional drama /Baseball
1920s/1950s
USA
"He loved her enough to build her a baseball stadium. With a tip of the cap to the works of W.P. Kinsella, A Diamond for Her is a historical and magical story of love between two people—Raymond & Rochelle—and two grand institutions—America & baseball. In 1920, railroad man Raymond Blythe had a series of disturbing dreams—giant creatures with Greek names playing baseball. Determined to discover their meaning, he sets off on a bizarre quest to find a connection between Iowa, Theodore Roosevelt, baseball, and his deceased father. While searching for answers at the Carnegie Library in Pittsburgh, he meets a young librarian named Rochelle Christy. This meeting sets him on another quest—to win her hand in marriage even if it means he has to establish his own baseball league in Pennsylvania’s Allegheny Mountains. Baseball magic was born in these mountains proving time and again that anything can happen inside the diamond. A Diamond for Her chronicles the fictitious history of the Winasook Iron Horses, the founding members of the Allegheny Independent League from 1921-1955. Through extensive interviews and archival research, semi-retired doctor Charles "Shoeshine" Henry chronicles the historical record of the Blythes and their remarkable team the Winasook Iron Horses and in doing so, gives a sweeping view of American history through the steady eye of America’s pastime."
I grew up in Canada, but in that little piece of Ontario that dips down into the US, with the Great Lakes and the Detroit River dividing us from our southern neighbour. Except here, it was also our northern neighbour – Detroit was north of us. I spent a good many hot and muggy summer evening swatting mosquitoes and watching baseball, either at our local park or on the television. I’ve even been to Tiger Stadium to watch the pros play.
And so there is part of me that is nostalgic about baseball, about those long-lost summer evenings, the ‘boys of summer’ in their uniforms, the padded umpire, the dust clouds when someone slid into base. The crack of the wooden bat sending a ball over the head of the outfielder for a home run. The moans and arguments from the grandstand when a runner was declared out. The eyes turned to the gathering thunderheads: would the storm stay away until the game was done?
Baseball was probably never as innocent as nostalgia makes it – or as Mark Sasse writes about it in A Diamond for Her, but in this history of a fictional baseball team, the Winasook Iron Horses, he captures all the wonder and pure pleasure of the game. With a purposeful nod to W.P. Kinsella and The Iowa Baseball Confederacy, and a storytelling voice that owes not a little to Mark Twain and Garrison Keillor, A Diamond for Her kept me both captivated and amused – just like those long ago games.
The book is not a novel per se; instead, it’s a series of interconnected episodes in the life of the Iron Horses founder, the fictional Raymond Blythe and his wife Rochelle, and the fortunes of the team. Framed around real life people and real history, and ‘written’ as researched and footnoted articles by the Blythe’s doctor, Charles ‘Shoeshine’ Henry, the reader meets Theodore Roosevelt, Satchel Paige, Jackie Robinson (and the Greek gods of baseball), and has a grandstand-eye view of the major events in US history.
Thoroughly recommended for anyone who can appreciate a well-told tall tale about a team that existed only in imagination and the heart, but that captures the soul of small-town baseball beautifully.
Reviewed for Discovering Diamonds