The Edge of Hell by S K Keogh 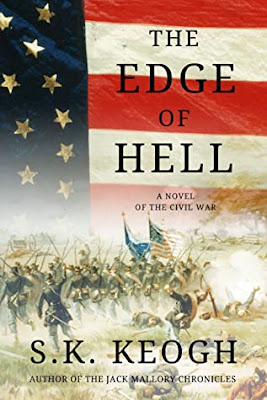 Amazon UKAmazon USAmazon CAAmazon AUGoodreads
military
1800s
US Civil War
"Thirteen thousand Union soldiers will lose their lives at Andersonville prison. James Keenan is determined Nate Calhoun will not be one of them. James and Nate have nothing more in common than their rural hometown. In Burr Oak, class distinction and petty jealousies pit the two young men against each other. Their combative relationship carries over into the ranks of the Eleventh Michigan Infantry, where Nate struggles to live up to the reputation left behind by his brother, and James contends with an abusive sergeant, Robert Langdon. Once a preacher in Burr Oak, Langdon seeks retribution for James’s part in his fall from grace. The bloody battles of Chickamauga and Chattanooga wipe away past differences and forge a deep bond between James and Nate. As Sherman’s armies march inexorably toward Atlanta, Nate’s capture puts that bond to the test. Determined to rescue his friend from notorious Andersonville prison, James risks desertion to embark on a dangerous journey through the wilderness of war-torn Georgia, pursued by Langdon, bent on revenge.The Edge of Hell tells the story of the rank and file from small-town America—farmers and shop-owners who made up the nucleus of the Federal army and, through extraordinary valor, preserved the Union."
I never fail to appreciate that being a Discovering Diamonds reviewer means that I find myself reading books which I wouldn't ordinarily have picked up, and this is a case in point. This is a war story (not my preferred genre), with battles described in detail. For page after page, chapter after chapter, we spend time with the men of the Eleventh Michigan and there is no let up, apart from one evening where the boys attend a dance and Langdon shows his true colours in a particularly nasty way.
In some ways, the time spent out on the campaign with the soldiers makes for claustrophobia, but then you begin to realise that you're there with these men and boys, living every moment, and you see how the bonds between them are formed and, in some cases, broken. And these are not just lines of soldiers; we really get to know them as individuals.
The opening chapters are benign, set in Burr Oak, where war seems far away, and with the characters of Nate and James being introduced. It is immediately clear that these two, in normal circumstances, will never be friends. Then we go to war, it gets extremely intense, and I feared that the story might be heading into a sort of 'Boy's Own Adventure Story' territory. I was wrong. The fighting, the deprivation, the real-life horror of the war: these are all shown starkly and I fully expected that. What I did not expect was how much I would care.
I won't give away any spoilers but not all of the young men make it to the end of the story, and those death scenes, not all on the battlefield, were incredibly moving and poignant.
We really see how these young soldiers, antagonistic at first, learn to  respect, and then care for each other. Feelings of duty, of responsibility, and guilt are raw, and well-described.
I wasn't sure if it was a good idea to focus the story purely on the battles and the awful scenes in Andersonville without switching from time to time to scenes set back in Burr Oak, but no, it absolutely had to be depicted this way. The soldiers couldn't get home, so why should we? Sticking with them for scene after scene we understand how much they come to matter to each other; they literally depend on one another to live.
On a side note, it was interesting to see how these Unionist soldiers reacted when they came 'up close and personal' with slaves, and how they also had some lessons to learn.
Was this book my preferred genre? No.
Was it well written and well plotted? Yes.
Would I recommend it? Absolutely.
Reviewed for Discovering Diamonds
© Annie Whitehead e-version reviewed