A Discovering Diamonds Review of From the Ashes by Melissa Addey 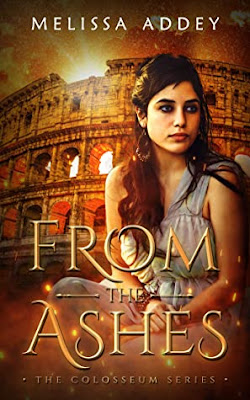 Amazon UKAmazon USAmazon CAAmazon AUGoodreads
Fictional Drama / Romance
79/80 CE
Rome
Set in Rome in 79/80 CE at the time of the construction of the Flavian amphitheatre that we now call the Colosseum, this novel tells of the lives and struggles of the backstage team who are to organise the first hundred days of events. As with modern music festivals, coronations, or Olympic games today, ancient Roman games didn’t just happen. Ex-centurion Marcus, who managed the amphitheatre in Pompeii, is contracted to create and run the opening ceremony and first few months of events in the biggest amphitheatre in the empire – Rome. Not an easy task, especially as he is grieving for his young family crushed in Pompeii under the Vesuvius eruption. Althea, a Greek slave woman, serves as his scribe and becomes his right-hand woman, friend and more.
The research in general is very good; descriptions of streets, buildings, clothes, food, transport, religion and superstition are comprehensive and well done, sometimes almost touching on the info-dump, but the writing is clear and fluent enough to bring us back from that precipice. The attitude to gladiators, Christians, animals and criminals is mostly realistic but surprisingly un-gory. Perhaps this is tempered for a modern readership?
The author resisted the urge to describe the disaster at Pompeii as it happened but made it more horrific as news trickled through to Rome and then as the two main characters visited in the aftermath. Althea turns through her mind what it must have been like. These were strong and very moving scenes.
The characters are well-defined and vivid and the developing relationships – collegiate and romantic – are warm and emotional. From the Ashes is, of course, fiction not history, but the interaction between Althea and her former master, Lucius, and between her and Marcus are more 21st century than 1st century. Rome was an extremely class conscious society and the difference between free citizen and enslaved human property was a gaping chasm. All slaves were considered property under Roman law and had no legal personhood. They could be sold at a whim and whipped or flogged for the tiniest infraction or misplaced word, whatever their place in the slave hierarchy. Althea questioning her social-climbing first master, Lucius, seemed unrealistic and somewhat jarring when placed into an accurate historical context.
Marcus, however friendly and pragmatic, was a former centurion, a rank earned from years of personal discipline and hard battle in brutal circumstances. As a Roman man of that experience from a land-holding family, it is unimaginable that he would allow a slave to address him familiarly, even in private. Nor would he express his feelings so overtly. As the relationship develops and Althea is freed, and they both work in the raffish atmosphere of the backstage Colosseum, their more informal relationship does becomes more plausible.
Although surprise is expressed that Althea is still a virgin at around twenty years of age, this is, however, not enough to deflect this reader’s doubts. By Marcus, Althea is on her third master. Sleeping with your slave and/or lending her, or him, to your friends for the same was so normal as to not be worth mentioning. If female slaves reached thirteen or fourteen years old intact, it was remarkable. I am aware, though, that many readers are over-sensitive to this modern-day uncomfortable fact of history, which is, perhaps why the author circumnavigated the issue.
While I very much enjoyed the story, the concept, and the vivid writing, this could have been a deeper, more believable story if the author had truly entered the Roman mindset. However, stepping around this inconsistency: as fiction this is a clever concept and a well-developed story; a welcome change from battles, emperors, riots, revolution, assassinations and army heroes. Few of us, even standing in the bright sunshine and atmosphere in the ruins of the Colosseum today, consider the sheer organisational skills and numbers of people behind the events. Sometimes, texts leave frustratingly large holes about the nitty-gritty of day to day life in Ancient Rome.
Reviewed for Discovering Diamonds
© Alison Morton e-version reviewed