An Unconventional Officer by Lynn Bryant 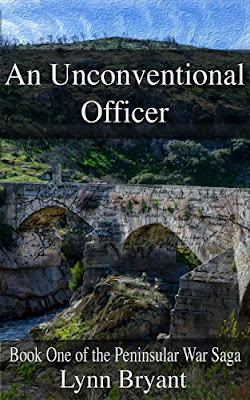 Amazon UKAmazon USAmazon CAAmazon AUGoodreads
military / Fictional saga
19th century
Europe / India
Wellington’s army (The Peninsular War Saga Book 1
"The year is 1802. A brief and fragile peace has been reached in Europe, but Britain is at war against the Maratha in India. In its Leicestershire barracks, the 110th infantry welcomes a new officer. Paul van Daan is far from being a typical raw young subaltern. Ambitious, talented and a charismatic leader of men, Paul has the means to buy his way up the ladder of promotion. He also has an unconventional past, a fierce temper and a passion for justice which bring him into conflict with other officers. Paul needs to find a way to adjust to the realities of life in the officers’ mess while remaining true to himself. Along the way he makes enduring friendships, forged on the battlefields of India and Europe, and builds an unexpected bond with the unemotional commander of the Peninsular army, Sir Arthur Wellesley. As the 110th join Wellesley in Portugal, Paul has established a reputation as a respected officer, a courageous fighter and a shameless womaniser. His marriage to the shy, gentle Rowena brings him companionship and stability. But it is Anne Howard, the extraordinary daughter of a wealthy manufacturer, who bursts into his life like a shooting star, leaving him dazzled. Beautiful, intelligent and courageous, Anne refuses to conform to the expectations of the men around her, and changes forever everything Paul thought he knew about women. From the slaughter of Assaye to the bloody battlefields of Portugal and Spain, this is the first book in the Peninsular War Saga which follows Paul through war, danger, loss, triumph and an unforgettable love story."
I read this novel some while ago - and have delighted in the rest of this exciting series (six books, I believe) - so when  asked to review Book One An Unconventional Officer for Discovering Diamonds I had no qualm about doing so.
The battles and skirmishes in this opening salvo are expertly written and depicted, as are the lives and loves (and otherwise!) of the superb characters. It is not just a story of warfare during the era of the Napoleonic War, it is a character-driven story - and boy, what characters they all are!
We have the war and the battles, and the death and the dying and the terrible injuries, but alongside, we have tension and romance, passion and misconceptions. Danger, violence, jealousy - and hope and joy as well! It ticks all the boxes. This novel is so well written it could almost be a factual account of the lives of the people who were there.
The lead character, Paul Van Daan is a typical fictional hero, larger than life with his own rigid (an unconventional) way of doing things - in war, in camp and in love and romance. He is a survivor and a man to truly root for.
He is also a 'ladies man' - his philandering  might not suit every reader, but I found the women in this story to be just as much alive and likeable (or unlikeable).
The book is a story to savour and enjoy - for its intrigue and adventure, for its accuracy and for the author's writing skill. Highly recommended.
Reviewed for Discovering Diamonds
© Jack Holt