A Discovering Diamonds Review of Bright Helm by Christine Hancock 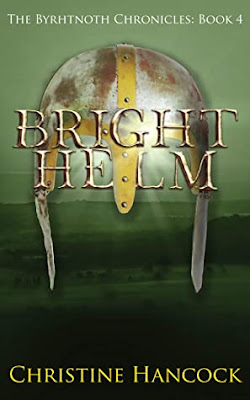 Amazon UKAmazon USAmazon CAAmazon AUGoodreads
Fictional Saga
10th Century / Anglo Saxon
England
The Byrhtnoth Chronicles: Book 4
"Separated by anger and unanswered questions, Byrhtnoth and Saewynn are brought together by a tragic death. Re-united, they set out on an epic voyage to discover the final truth about his father. The journey takes them far to the north, to Orkney, swathed in the mists of treachery, and to Dublin’s slave markets where Byrhtnoth faces a fateful decision. How far will he go, to save those he cares for?"
Anyone interested in Anglo-Saxon history will be familiar with Byrhtnoth, his name being famous for his death at the Battle of Maldon in AD 991. (Another of our English heroes who are highly regarded for losing a battle, rather than winning it – the Battle of Hastings and the death of King Harold Godwinson, being another.)
This is the fourth in Ms Hancock’s saga about the life of Byrhtnoth, an intriguing fictional account of a man whom, were it not for his death, we would probably know nothing at all about beyond, perhaps, his name. She has woven the few facts into a lengthy story, using as much research as is available to create something which at least feels ‘real’.
This is a novel – a series – about a journey through life, with all its excitements and thrills, dangers and disappointments. The characters and events are credible, although not knowing over-much of Anglo-Saxon history I cannot say how well the research or accuracy has been done.
Maybe a little slow to start? But then I have not read the previous three books, so I did feel slightly disorientated and found myself looking up a few things on Google and Wikipedia. I suggest, therefore, if you enjoy novels of this period, perhaps it would be best to start at Book One?
Recommended for readers interested in this particular period of English history.
Reviewed for Discovering Diamonds
© Jack Holt
e-version reviewed