It Happened On Fifth Street- a tale of forgotten heroes by Robyn R. Pearce 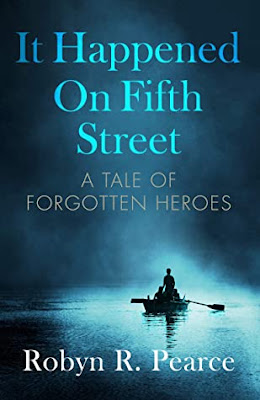 Amazon UKAmazon USAmazon CAAmazon AUGoodreads
Timeslip / Fictional drama / Young Adult
Contemporary / 1800s
New Zealand / USA
Freedom Series Book
“1837. America. A hidden letter. Family secrets. And Alf – determined to uncover them. 2015. New Zealand. A forgotten tin trunk. An old coin. And Abigail – searching through ancient documents. Suddenly, Abi is hurled back in time. She comes to, sprawled on the floor of a strange room. A boy in old-fashioned clothes is looking at her in shock. He’s holding a letter – one she’s just read. They pool their knowledge. What is the Committee of Vigilance? What is Joseph doing at night, down by the Ohio River? Could it be something to do with slavery, the vile trade his father rants about? But nothing adds up. It takes ages, but at last – a breakthrough. They crack the secret and Alf demands to be included. He’s sworn to silence, for lives and livelihoods are in grave danger. And then, things go bad. Very bad. It Happened on Fifth Street: a tale of forgotten heroes is a coming-of-age historical novel and the first in the Freedom Series”.
1800s slavery in what would become the United States is an emotive subject. If handled badly, or deliberately ‘Hollywood-esque’ stereotypical, a novel can be at best an uninteresting read, at worst, bordering on racism. It Happened On Fifth Street, however, is neither. It’s a super novel with a delicate subject matter sensitively handled. Equally, the timeslip element is well done, in a believable manner.
Although the protagonist is a teenager, adult readers will enjoy this story as much as any young adult. The historical detail is skilfully interwoven into the fictional, the characters are interesting and the read itself engrossing and entertaining – while making you think. We have action, suspense, adventure, danger and throughout that ‘page turner’ need to find out what happens next.
The author takes us into a different world, where attitudes towards slaves, slavery and prejudice are very different to our own today, and helps the modern reader to make sense of these pre- Civil War attitudes. Suitable for boys as well as girls (and don’t we all welcome a novel which will attract young male readers!) and probably a cliché, but this is the sort of novel which should be compulsory reading in all schools, worldwide.
Very enjoyable. I look forward to the next in the series.
Reviewed for Discovering Diamonds
© Helen Hollick e-version reviewed