A Discovering Diamonds Review of The Raided Heart by Jennifer Wilson 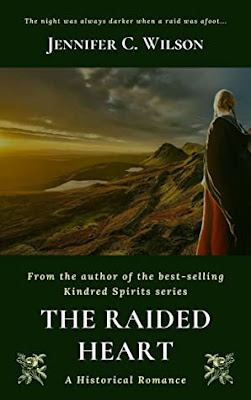 Amazon UKAmazon USAmazon CAAmazon AUGoodreads
Fictional Drama / Romance
1400s
Northumberland
"Northumberland, 1470s. Ambitious reiver Will Hetherington wants to prove himself a competent man in the company of Robert Mathers, head of the village. Headstrong Meg Mathers, Robert’s younger sister, wants to remain at her beloved home, caring for her family, the land and the village of Long Ridge where she’s grown up. When an accident throws Meg and Will together, attraction builds, and both begin to realise they might just have met their match. But life on the 15th century border is never that simple, and Meg finds herself betrothed to the weakling son of tyrannical neighbour, Alexander Gray. When tragedy strikes, can Meg and Will find their way back to each other, and can Will finally take his own personal revenge on Gray?"
In the 15th-century Borders, young Will Hetherington, an outsider taken into the Mather family’s village, is eager to prove himself both loyal, and a competent, valuable reiver.  Raiding across the line dividing Scotland from England for cattle is a dangerous business, and men must be excellent riders, quick thinkers – but also obey orders. When Will’s mare accidentally injures Meg Mathers, the youngest daughter of the family, Will is ordered to give her all the assistance she needs during her recovery. He’s not happy about this, but he can’t afford to disobey.
The Borders is not an easy land, neither politically nor geographically. Windswept, rocky moorland, treacherous bog, thin soil – all make agriculture difficult. Cross-border theft and destruction; families manoeuvring for position and authority; the unique justice system of the March Wardens and laws specific to retribution for raids led to a way of life very different than other parts of England. Jennifer Wilson has positioned her romance between Will and Meg against this setting.
The role of and expectations for Meg are clear: she is to help run the house and village until a suitable marriage is arranged. She is an asset to be bargained with, to help create or solidify alliances among the reiver families. Will has been accepted by the Mathers after raiders destroyed his own home, following his sister, who has married into the village, but he has no status to allow him to be considered as a husband for Meg.
The story is told in clear, competent prose and with dialogue that flows naturally. We watch the romance growing between Meg and Will against a background of the tasks of house and village and the concerns of the Mathers to balance the opposing factions and the law. But Meg’s responsibilities to her family must take precedence over her own wishes, regardless of what her heart tells her. There are plenty of twists and turns, reversals and barriers in The Raided Heart, enough to keep the reader wondering how – or if – this love story will reach the desired conclusion.
The social and legal structure of Northumberland in the 15th century are described well; what I found lacking in the book was a sense of place. Other than town names and the description of a bastle, the fortified house common to the reiver families, there is little to ground the reader in the distinctive landscape of Northumbria. Yet it is a landscape that helped create the reiver way of life, and must have been both an immense challenge to navigate and a refuge for those who knew it well.
That comment aside, this is a novel recommended for fans of romance embedded in a larger historical story.
Reviewed for Discovering Diamonds
© Marian Thorpe e-version reviewed