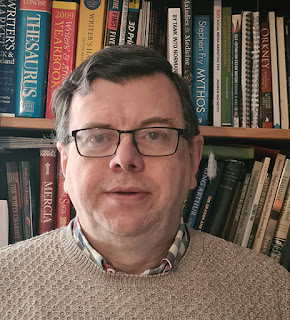 Hello Richard, welcome to our Discovering Diamonds Guest Spot. Along with my readers and visitors I love to hear from authors who write wonderful stories. There’s nothing better than curling up with a good book,  box of chocs and glass of wine to hand!
Q. Would you like to tell us a little bit about yourself...
A. I trained as a doctor and worked as a General Practitioner with a North Birmingham practice until April 2017 when I retired from NHS practice to focus on my other work. I am married with two children.
I am a historical fiction, historical fantasy and Young adult sci-fi, writer. I also write online articles on historical, publishing and gaming related topics. A keen player of board games and other games I am one of the directors of UK Games Expo (the UK's largest hobby games convention and one of the largest in the world). I am a board game designer and my first Board Game 'The Great Fire on London 1666' was published in October 2010. Since then, I have published several other games.
Q. Where do you live?
A. Sutton Coldfield in the West Midlands. Whilst basically a suburb of Birmingham it has its own distinct identity and intriguing aspects to its history. It has one of the largest urban parks in the UK which dates back to a Deer park of Henry VIII’s time whose chaplain Bishop Vesey founded a school here in 1527 and managed to get the town royal patronage, hence the full title being Royal Sutton Coldfield.
Q. If you had a choice to live anywhere – where would it be?
A. I do love traveling and seeing the world particularly the ‘old places’, locations with deep history. I like good food and a nice drink so there are many locations I like to go and could happily live such as Italy or Germany, but I can honestly say that the UK with all its quirky rules, history and traditions, its pubs and cricket grounds suits me just fine.
Q. Modern house, old cottage, castle or something else?
A.  My own house dates back to the 1930’s but I would love an older house with some history and a big library! But I am also a city dweller. I like the convenience of shops that don’t close much and multiple options for restaurants and cinemas. So a regency town house in Oxford perhaps or maybe Edinburgh which is a city I am fond of.
Q. Cat, dog or budgie?
A. I am not really an animal person and don’t have a pet. We did have a budgie when I was a child, but it is cats that seem to like me. My mother-in-law had two when she was alive and they both seemed to want to sit on me. Dog’s seem a bit high maintenance to be honest.  So, a cat if I was to have a pet.
Q. Are you a ‘dining room for dinner’, or a ‘tray on your lap in front of the TV’ person?
A. Bit of a mix. We don’t seem to watch much TV collectively, but it is nice a few evenings a week to sit together and watch something you can share then talk about later and doing that whilst eating just seems easiest. But it is nice also to chat about ‘life’ without that distraction so most weeks we will also pull up a chair and eat breakfast or lunch at a table and plan things. Other times especially this year with us working from home has seen everyone typing at a keyboard whilst munching a sandwich in different rooms.
Q. TV preferences – documentary, drama, comedy, soap or thriller?
A. If watching with family when they are here it would be some form of drama or thriller series either historical based detective stories (maybe Poirot, Morse etc) or some form of sci-fi and fantasy (so yes Game of Thrones). If watching alone similar but I tend to favour a film, particularly a series of films. The only thing I really don’t like is Soap or ‘Reality’ TV in any form.
Q. What was your first published novel about?
A. This was The Amber Treasure in 2010 which was the first book of my Northern Crown series which follows the story of a young nobleman - Cerdic  - as he lives through ‘the darkest years of the Dark Ages’, those we know the least about. Cerdic, the nephew of the great warrior Cynric, grows up dreaming of glory in battle and writing his name in the sagas. When war comes for real though, his sister is kidnapped, his family betrayed and his uncle's legendary sword stolen. It falls to Cerdic to avenge his families loss, rescue his sister and return home with the sword. 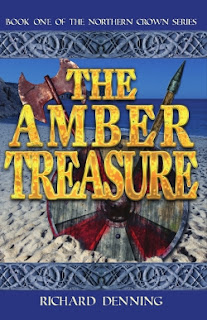 Q. What was your last novel about?
A. This was Kith and Kin the 5th book in the Northern Crown series. The series began in 580 - the year of his birth. By the end of book 5 the story has reached the year 612. The storyline which was relatively simple in the first book – an adventure/battle novel has evolved as the story has progressed and involves the story of both rival brothers and rival kings and the effect all that has on Cerdic’s family. 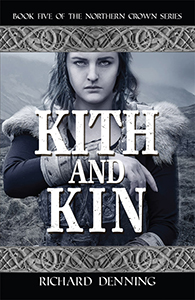 Q. Do you write in one genre or several?
A. My primary area is Early Anglo-Saxon Britain but even there I write in two series. One in Northern Crown and straight historical fiction whilst The Nine Worlds series is aimed at children and blends in fantasy and mythology from the Anglo-Germanic-Norse worlds. I have also written some time travel novels and other historical fantasy.
Q. Have you ever considered exploring a totally different genre?
A.  I have enjoyed the fantasy and sci-fi novels and can’t imagine writing modern thrillers or pure romance novels for instance. I fancy sometime writing something in the  detective/ who-done-it genres as I already blend in some plot twists and gradually revealed knowledge at times but I feel I would need to find a period where that type of novel would be fresh as many period have been essentially ‘done.’
Q. If you could, which two of your characters would you like to invite to spend an afternoon with you?
A. Septimus Mason – from the Hourglass series (the time travel ones) a bit of a mercenary and a rascal but with a good heart and sense of humour who would just be fun to be around.  Hussa, the main enemy from Northern Crown. Villains can often be more interesting than heroes don’t you find?
Q. Where would you go / what would you do? With Septimus Mason along we would have access to time travel and the ability to go anywhere so I think we start with breakfast in a New York diner in modern times (Pre Covid). I have never been to New York so that would be interesting. Then off to ancient Rome to take in the sights. Lunch perhaps in Paris in the '20s. After lunch we take in Lords for some cricket in the Edwardian era along with high tea before sliding back to visit the Great Exhibition at Crystal Palace. Dinner maybe as a cosy tavern in the Scottish islands with a steaming bowl of mussels. Maybe finish the day at Lerwick in the Shetland Islands during the annual Viking boat burning ceremony which is on my bucket list.
Q. How do you prefer to travel? Plane, boat, car?
A. I prefer driving – which can involve a ferry. So, for instance once a year I drive to Germany (well in a normal year that is) to attend a board game fair – the largest in the world – in Essen which is in the Ruhr and I like the road trip there and back. We have done holidays driving to and from Italy and Austria and up to Orkney. I prefer the freedom of a car to a plane. That said, I am happy flying if it is more practical
Q. You are out for a walk. You see a chap sitting on a wall, looking right fed up – but there’s something odd about him... What? And what  do you do?
A. He is completely naked. I enquire why and he says he was on a stag do (he is the groom) and he woke up nude and handcuffed to a gate in the wall. The wedding is in an hour and his best man and mates having left him stranded have not turned up to release him. We cannot unlock the handcuffs but find that the gate post is loose, so I am able to deliver him, complete with the gate still handcuffed to him to the church, by way of a tailors! I got invited to the reception.
We have a long-running Radio programme here in the UK called Desert Island Discs on which celebrities talk about their life and select eight of their favourite discs... so changing that slightly...
Q. If you were shipwrecked on a desert island, what eight books would you want to find left in an abandoned hut? (There’s already a Bible, the Quran, and the complete works of Shakespeare)
1. The Lord of the Rings (J/R.R. Tolkien)
2. The Hitchhikers Guide to the Galaxy (Douglas Adams)
3. Going Postal (Terry Pratchett)
4. Sharpe’s Eagle (Bernard Cornwell)
5. Flashman (George Macdonald Fraser)
6. Mrs Beeton's Cookery Book (always useful!)
7. The Decline and Fall of the Roman Empire. (Edward Gibson)
8. A Christmas Carol (Charles Dickens)
Q. What sort of island would you prefer, and why? (e.g. Desert Island... Hebridian Island...)
A. A Scottish Island. Maybe Orkney. Somewhere with old ruins, the older the better. Things always make more sense when there is something old about. And a Scottish island have access to great seafood.
Q. And you would be allowed one luxury item – what would you want it to be? (a boat or something to escape on isn’t allowed.)
A. I would need some way of writing. Ideally a laptop but assuming power is going to be an issue a large notebook, pen and ink would suffice.
Author website
http://www.richarddenning.co.uk/
Author page on Amazon.co.uk
https://www.amazon.co.uk/Richard-John-Denning/e/B003CUUJM4
Author page on Amazon.com
https://www.amazon.com/Richard-John-Denning/e/B003CUUJM4
Click HERE (and scroll down to 'D') to find our  reviews of Richard's books  on Discovering Diamonds
See Our Full
GUEST LIST