The Raider Bride by Johanna Wittenberg 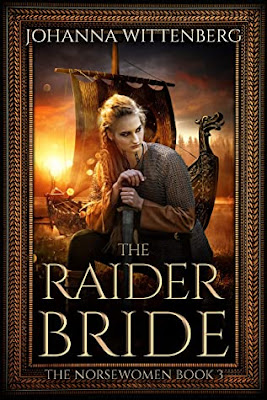 Amazon UKAmazon USAmazon CAAmazon AUGoodreadsavailable on Kindle Unlimited
Fictional Saga /Fantasy
Ninth Century
Norway
The Norsewomen #book 3
"King Solvi is dead at the hands of the Irish king. To gain her inheritance, Ragnhild must sail to Ireland with her brother to seek vengeance for a father she’d fought a war against. But things don’t go as planned. From the outset, the venture is beset by betrayal and bloodshed…"
Another stunning work of historical fiction by the mistress of the Norse tale. The Raider Bride is the third book in an utterly convincing series about women warriors in northern Europe in the ninth century. This one concerns Ragnhild (aged 17), daughter of the late King Solvi, promised in marriage to an old Irish king called Murchad (he’s 30).
Like all feisty warrior princesses, Ragnhild is having none of this arrangement. When she hears that her father has died at the hands of Murchad, she sets her heart on accompanying her brother, Harald, on a trip to Ireland to avenge their father’s death. Her warrior band, the shield-maidens, make ready their longboat, Raider Bride, and the journey begins.
This story is a delight, a feast for the reader in so many ways. We have sea voyages, battles galore, treachery and betrayal. We are invited to compare the two ancient cultures, Norse and Irish – their customs, attitudes, and, of course, their religions. The Irish have embraced Christianity; the Norse people have their pantheon of gods, Odin, Thor, Freya etc. The story navigates its way through a series of twists while we sit on the edge of our seats worrying if Ragnhild and her shield-maidens will survive their experiences and avoid Valhöll.
Highly recommended.
Reviewed for Discovering Diamonds
© JJ Toner e-version reviewed