A Discovering Diamonds review of Monday's Child by Rosemary Morris 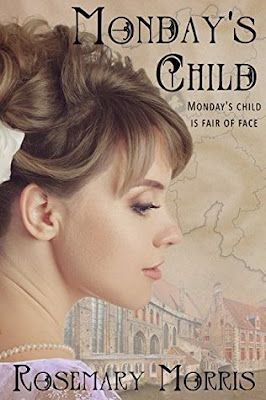 Amazon UKAmazon USAmazon CAAmazon AUGoodreads
Regency Romance
1815
England / Brussels
"In March 1815, Napoleon Bonaparte escaped from exile in Elba. In Brussels, 18 year-old Helen Whitley, knows that war with France between Britain and her allies, is inevitable. A talented artist, Helen is aware of the anxiety and fear underlying the balls, breakfasts, parties, picnics and soirees, held by the British. In an attic, she paints scenes and portraits in which she captures the realities and emotions of daily life during the hundred days before the Battle of Waterloo. While Helen lives with her sister and wealthy brother-in-law, Major Tarrant, she waits for Major, Viscount Langley, to arrive in Brussels and propose marriage. Langley, who serves in the same regiment as Tarrant, is her brother-in-law’s closest friend, so Tarrant and her sister have no objection to the match. Helen is grateful to her brother-in-law for including her in his household. Nevertheless, she regrets being dependent on his generosity, so she looks forward to being mistress of Langley’s heart and home.
Before Langley leaves England to join his regiment, he visits his ancestral home, to inform his parents that he intends to marry Helen. Yet, when he arrives in Brussels to join his regiment, he does not propose marriage to Helen, and her pride does not allow her to reveal the misery caused by Langley’s rejection."
I have not read this author before – ‘my bad’ (as that awful saying goes). I found the narrative and the writing elegant and entertaining, with enough of everything to please most readers who enjoy the Regency Romance genre – intrigue, romance, adventure, survival of public war and private emotion. We have a heroine we like, a suitable hero, annoying relatives, class differences and expected etiquette all brushing shoulders with unexpected twists, and good guys and bad guys (and gals, of course).
The characters, especially Helen herself, were well portrayed, along with the opposite life between the glitter of the ballroom and the gore of the prospect of battle engagement. The author seems to know her stuff where the detail of life in the Regency period is concerned, and I also found it refreshing to read a novel that was set around the Battle of Waterloo but did not actually concentrate on it from the military point of view; I enjoyed seeing the people and their reactions, more than the detail of the battlefield events.
I’d say that the fans of Regency Romance will enjoy this tale.
Reviewed for Discovering Diamonds
© Ellen Hill e-version reviewed