The Boxer and the Blacksmith by Edie Cay 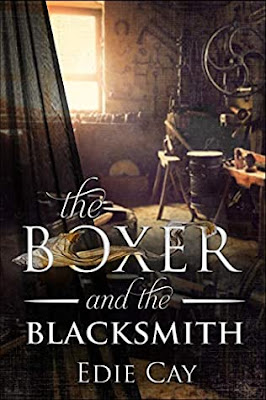 Amazon UKAmazon USAmazon CAAmazon AUGoodreads
Fictional Saga / Romance
Napoleonic / 1800s
London
(When the Blood Is Up #book 2)
"As London's undefeated women's boxer, Bess Abbott has the scars-both inside and out-to prove it. But when one of her boxing students, Violet, needs protection, Bess Abbott's rock hard heart cracks open. And when a handsome blacksmith comes along, giving her compliments and treating her, well, like a woman, Bess doesn't know what to do. She's on the ropes in the face of love.
Os Worley was a child when he became an accidental stow-away. He grew up not knowing the family or the island that inflected his accent. His only memory of his mother is a head bent, hands working a stitch, a voice humming a melody. Now that he has his own foundry, and his own apprentice, he's come to London to find the woman attached to this memory. His heart is already tempered and quenched, focused on his goal-but a lady boxer threatens to recast his love in her own image.
As Os and Bess face off, will they toe the line or retreat to their corners?"
They say one shouldn't judge a book by its cover and, equally, one shouldn't judge it by its title or, for that matter, its subject. This is, on the face of it, not a book I would have picked up to read and yet, when I did, I could not put it down.
Yes, there were things that weren't perfect and let me get them straight out of the way because one occurs on the very first page: the use of the Americanism 'snuck' chimed wrongly with me for a book set in post-Napoleonic era London. On a couple of occasions the description of addresses and the locale were not quite how they would normally be described: "Off Edgeware and Harrow" sounded wrong in the mouth of a 19thC English person and even in the 21st century the English don't think of distances in cities as being in 'blocks'. There's also an occasional mixing up of lie/lay/laid.
BUT
These are the only niggles which took a very tiny bit of the sheen off an excellent novel. This is the second in a series but is described as a standalone, and it absolutely reads as such. Yes, there are references to what happened in Book One but they are clear, unobtrusive, and minimal, giving only the information needed to move the story on.
I instantly warmed to Bess. She's unusual, for her time, but she is a beautifully-drawn three-dimensional character, with strengths and flaws. She's bullish and sometimes she acts against her own better judgement, which makes her rather fun. Os is introspective and perfectly and succinctly described, just as he himself is economical with words. Ms Cay has a knack for description in general, with some beautiful phrasing which instantly paints a picture for the reader. I particularly liked one scene where Os, a big man, squeezes into a chair and makes it creak when he moves. When he thinks that he doesn't fit in this particular environment, he means it metaphorically and literally. One gets a good sense of the crowds on the street, in the pubs, and at the boxing matches. All five senses are employed and the scenes are brought to life vividly.
This is, at its heart, a love story between two people, neither of whom quite have a place in society. But there are many more layers to the story and a fine array of supporting characters who, though they don't have a huge number of lines, make their presence and their characteristics felt. The author has clearly done her research and presents us with a London which was rather a melting pot, where members of the upper reaches of society mixed with those in other circles, where social mobility is beginning to be a reality, and where people of different races rub along quite happily. There are darker themes too, and a reminder that the abolition of slavery, when it came about, was not so abrupt as we might think.
In this, and in the story of the young girl, Violet, Ms Cay presents us with a history lesson, and in a way an essay on social inequality, deprivation, and the abuse of women. Yet she weaves it through the novel so skilfully that we are never lectured, only made aware.
From the author's notes, I discovered that her main character was based on a real-life person but that she took elements of her life and moved them to a different era. I applaud this ingenuity and I think it works very well. I enjoyed spending time with these people and what shines through is their relationships with each other. I really believed in their connections, their friendships, the enmity. Even the 'bit part' players, such as the young Irish woman whom Bess will meet in the ring, are rounded and real. In fact, I'd go so far as to say there's not a single two-dimensional or stock character in the book, for everyone is shaped by their circumstances and experiences, and acts accordingly and believably.
I'm so glad this book appeared on my review list, otherwise I'd have missed an opportunity for a fantastic read, and I shall be looking out for more of Ms Cay's books.
[Word of caution, for those who might be offended, there is one instance of a particular four-letter word.]
Reviewed for Discovering Diamonds
© Annie Whitehead
Discovering Diamonds Senior Reviewer e-version reviewed