This Day is Ours by Gretchen Jeannette 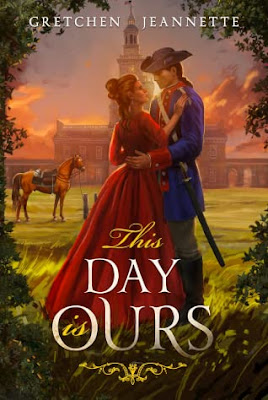 The Amazon blurb for this epic novel says ‘A Love Forged in the Fire of Revolution’, which sets it neatly in the sub-genre of historical romance, but This Day is Ours is much more than a period love story. The author, Gretchen Jeannette, knows her eighteenth century colonial history inside out, meaning she is able to convey vital background details with a light hand through dialogue and sharply focused descriptions of the Philadelphia locations, the various town and country households, and battle fields – and I learned quite a lot about the American War of Independence along the way.

The cover also suggests the story will be a fairly typical Hollywood-style costume triangle with an elegant, educated young man about town courting an elegant, educated young woman of his own class, whose head has been turned by a rough diamond – pirate, rancher or, in this case, a highwayman named Jack Flash. Superficially, this is the case, the woman, Alexandra Pennington, is a young widow of means, loyal to the British Crown in the early days of the Revolution. The elegant man about town, Charles Villard, is trapped in his class’s social mores, yet far more complex than the stereotype. The dashing hero highwayman, Dalton Jameson a.k.a. Jack Flash, is from a humble background but intelligent, courageous and altogether more subtle than the usual renegade. He’s also a gifted horseman – meaning he’s a good, kind person despite the robberies and pistols.

The first encounter between wicked Jack Flash and the feisty heroine is indeed the stuff of romantic movies, but the manner in which Alexandra discovers her personal strengths and assesses her loyalties takes the story to deeper levels, as does Dalton/Jack’s involvement in George Washington’s rabble of an army and the War for Independence.

This Day is Ours is a novel with amusing characters, glorious, glamourous balls and gruesome battle scenes, and a story-line that twists and turns and kept me reading until late at night. A very well written book, worth reading for both its entertainment value and its historical setting. Sound research and a cracking story, definitely a Discovered Diamond.