The Lifeline, by Deborah Swift 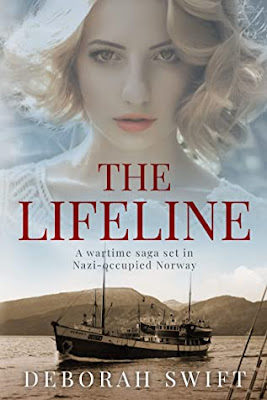 Amazon UKAmazon USAmazon CAAmazon AUGoodreads
In the stories that have grown up around the heroism of ordinary people in WWII, the ‘little boats of Britain’ and their involvement in the evacuation at Dunkirk is well known. Much less well known is the Shetland Bus, the clandestine cooperative operation between Britain’s SIS and SOE units and the Norwegian resistance.
After the German invasion of Norway in April of 1940, Norwegian fishing vessels began arriving in the remote Shetland Islands, bringing people fleeing the Nazi regime. Many of the captains and crew of these boats - fishermen from the coastal villages of Norway - became part of the ‘Shetland Bus’, making multiple trips back to Norway under cover of night and winter seas to deliver armaments and bring back compromised agents, as well as Norwegians who feared arrest, both Jews and members of the resistance.
In The Lifeline, Deborah Swift tells this story through the experiences of two central characters, Jorgen and Astrid. Jorgen is a member of Milorg, the main Norwegian resistance movement, trained as a radio operator. Astrid is a primary teacher. The novel opens with Jorgen realizing he has been compromised: he must flee, hoping to make the coast and escape to Shetland, leaving Astrid behind.
The story reflects both the terror and tedium of occupation; the tiresome check of papers, the long queues for little food, the casual harassment and random reprisals for resistance, however minor. While Jorgen battles mountains and weather in his long route to the coast, Astrid’s anger at the increasing Nazi encroachment on Norwegian culture and tradition reaches a head when schools are forced to adopt a new curriculum focused on Nazi ideology. She joins those involved in civil disobedience against the Germans. The real history of these events is woven into Astrid’s and Jorgen’s stories competently, without overwhelming the reader.
The risks taken by ordinary people, when even the wearing of an item as innocuous as a bobble hat could mean arrest, are reflected in Astrid’s experiences, while the dangers faced by the members of Milorg are given life in Jorgen. He has been joined in his flight to the coast by another man: can he be trusted? When Astrid, now a fugitive herself, chooses to aid the family of one of her students, the Jewish girl Sarah, their paths begin to converge on Shetland.
Swift paints a picture of immense bravery, both physical and mental, from men and women caught up in a war not of their making. We care about these characters, both the fictional ones and the historical ones; they are rounded and real, with doubts and fears and mistakes. War changes them in ways they do not expect, leading to an ending a little different than what might have been expected.
Recommended for readers of character-driven WWII stories, or anyone who wants to know more about this little-known piece of history.
Reviewed for Discovering Diamonds
© Marian Thorpe e-version reviewed