The Happiest Man on Earth by Eddie Jaku Non-fiction 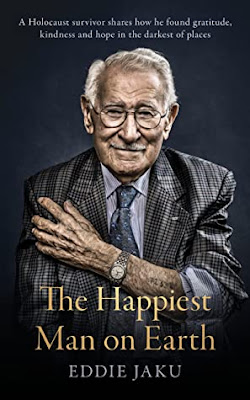 Amazon UKAmazon USAmazon CAAmazon AUGoodreads
Autobiography
WWII
"Life can be beautiful if you make it beautiful. It is up to you. Eddie Jaku always considered himself a German first, a Jew second. He was proud of his country. But all of that changed in November 1938, when he was beaten, arrested and taken to a concentration camp.
Over the next seven years, Eddie faced unimaginable horrors every day, first in Buchenwald, then in Auschwitz, then on a Nazi death march. He lost family, friends, his country.
Because he survived, Eddie made the vow to smile every day. He pays tribute to those who were lost by telling his story, sharing his wisdom and living his best possible life. He now believes he is the ‘happiest man on earth’.
Published as Eddie turns a hundred, The Happiest Man on Earth is a powerful, heartbreaking and ultimately hopeful memoir of how happiness can be found even in the darkest of times
This is a remarkable book.
Eddie Jaku, born in 1920, tells us his life story. A German Jew, he was caught up in the brutal excesses of the Nazi regime. Eddie was interned in Buchenwald and Auschwitz. His excellent engineering education made him Economically Indispensable and kept him alive, although he came within a hairsbreadth of annihilation many times.
His sister, Hennie, was the only one of his family to survive the war. After the war, in 1955, he and his wife moved to Australia.
This book should be required reading for schools and for anyone writing about the Holocaust. Writing the book at the age of 100 years, Eddie and his wife have two sons, four grandchildren and five great grandchildren. His message to the world is one of forgiveness, although he confesses that he still does not understand what came over the German nation in the 1930s.
Reviewed for Discovering Diamonds
© J J Toner e-version reviewed