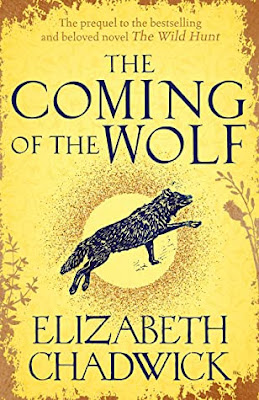 Amazon UKAmazon USAmazon CAAmazon AUGoodreads
Fictional Saga
1069
Wales
"The Welsh Borders, 1069. When Ashdyke Manor is attacked, Lady Christen is forced to witness her husband's murder and the pillaging of her lands at the hands of brutal Norman invaders. It seems the pain is finally over when Miles Le Gallois, Lord of Milnham-on-Wye, calls off the attack. But he has Christen's brother under armed guard and a deal to offer: her brother's freedom for her hand in marriage. Christen finds herself hastily married into the enemy side, with her brother swearing his vengeance on her new husband. Miles and Christen's precarious union invites enemies from all sides and when Miles is summoned for a lengthy campaign by the King, Christen is left to watch his lands. In the midst of war, two enemies must somehow learn to trust one another if they are to survive . . ."
I've been an eager fan of Elizabeth Chadwick's novels for many years now - starting from when The Wild Hunt was first published - and so it was a great pleasure to read this title as a prequel to Ms Chadwick's excellent debut series (well, debut way back, when she first started writing!) The Coming Of The Wolf is a standalone read, but I would wager you will go on to read the others, if you have not already done so.
This one is of the 'romance' genre rather than Ms Chadwick's recent novels, which are more biographical fiction in nature, but the detail of research and 'feel' for the period remains the same, along with the author's impeccable writing skill.
Personally, I prefer Ms Chadwick's later novels written about real characters of the past (William Marshal, Eleanor of Aquitaine etc) but this is still a brilliant read - entertaining, enjoyable, absorbing - although I do admit (as anyone who knows me is well aware) I am no fan of Duke William of Normandy or his 1066 era followers, so I did rather root for the anti-Norman characters here in The Coming of the Wolf.
What a pity that the author could not make it alternative fiction though!
Recommended for an enjoyable read.
Reviewed for Discovering Diamonds
© Helen Hollick e-version reviewed