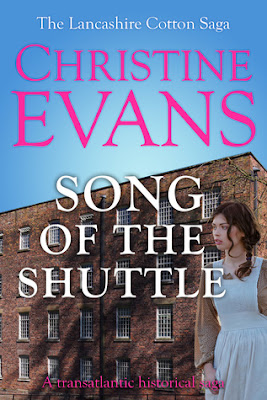 Amazon UKAmazon USAmazon CAAmazon AUGoodreads
Fictional Saga
1861
England / America
(book 1)
“Jessie Davenport, a young mill worker, and Honora Darwen, an orphan determined to follow in her father’s medical footsteps, strike up a friendship in the busy industrial town of Gorbydale. With whispers of war on the horizon and discontent spreading in the Invincible Mill where Jessie works, the lives of the young people in Gorbydale are changed forever. With her mother unwell and her brother sent overseas to serve in the American Civil War, Jessie has to fight for the survival of her family Honora, meanwhile, struggles to break free from her subservient position in her uncle’s grand house. Could a voyage to the New World give the two women the freedom they crave? Will peace come to the turbulent town of Gorbydale? And could love be on the horizon for Jessie and Honor.”
This novel reminded me of Catherine Cookson in the sense that it takes you into the world of the Lancashire mills and the huge difference between the families who ‘had’ and those who ‘hadn’t – the poor who struggled, and the rich who didn’t. The difference, however, was that Ms Cookson (as far as I recall) did not touch on the effect that the American Civil War had on the Lancashire cotton mills.
I found it a little difficult to sort out the characters at first, but once I had who was who in mind the story flowed better. The two main families, the Overdales and the Davenports, were well-drawn characters which the author cleverly used to show the difference between the Victorian class system and the mill workers and mill owners. Add into the plot the inevitable crossover of Romeo and Juliet-type  romance between the houses of Davenport and Overdale and you have an engrossing storyline.
My only slight reservation is that perhaps the book does not quite show racial prejudice true to form, particularly in scenes set in America during a civil war when slavery and appalling attitudes towards black Africans were acceptable among white people. Having said that, readers must keep in mind that our views today are (thank goodness) very different to those of the 1800s.
I hope to read book two of the saga to find out ‘what happens next’.
Reviewed for Discovering Diamonds
© Anne Holt e-version reviewed