A Discovering Diamonds Review of A Suitable Match by Jayne Davis 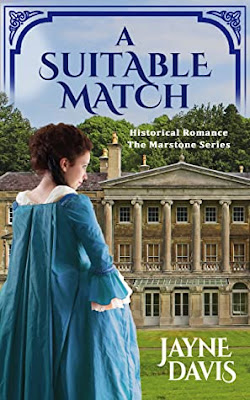 Amazon UKAmazon USAmazon CAAmazon AUGoodreads
Regency Romance
1782
England
“Lady Isabella has been kept on a tight rein by Lord Marstone, her overbearing father. She's excited when he packs her off to London to make an advantageous match, confident her brother will preserve her from an unsuitable alliance. But when her brother is called away on vital business, he asks Nick Carterton to stand in for him. Nick, a scholar who relishes the quiet life, has avoided marriage for years but is finally giving in to his father’s request that he seek out a bride. Looking out for a young miss new to society is the last thing he'd choose to do. Will Nick’s attempts to help merely reinforce Isabella’s resentment at having her life arranged for her? Can Nick keep the headstrong Isabella out of trouble, put off unsuitable suitors, and still find himself a wife? Book 2 in The Marstone Series, A Suitable Match can be read as a standalone story, or to follow Sauce for the Gander.”
Oh, I do like a delightful Regency Romance, especially when the weather outside is frightful – and Covid restrictions keep me indoors anyway, so the company of enjoyable characters is extra appreciated.
After her sisters were married, Isabella (Bella) is left on her own; she has very little idea of the world outside her own home. Her father expects everything to go as he wishes, and thinks only of himself, his social standing and his own political views – no one else is important. (I kept thinking of a certain person who lived in a White House until January 2021 for this character!) Nicholas is looking for a wife, but he has in mind the sort of woman he wants – Bella is not among them. But when she arrives in London (sent by her father in order to marry) everyone’s plans turn topsy-turvy – because of Bella landing in various situations of danger.
Possibly, Isabella could be irritating to some readers (I did feel I wanted to give her a good talking to at times!) but then, this is the stuff of Regency Romance. Perhaps, also the cast are somewhat stereotypical of the genre – the obnoxious father, the reluctant young hero, the impetuous heroine – but again, this is what is expected and wanted by readers (and I include myself) otherwise these books would not be ‘Regency Romances’ would they?
However, to be different from the ‘typical’ there is a lot going on in this novel! Apart from romance, we have blackmail, spies, alarming situations and action a-plenty, which, all-in-all make this an entertaining and enjoyable read.
(Part of the Marstone series - but a stand-alone novel)
Reviewed for Discovering Diamonds
© Mary Chapple e-version reviewed